BALTIMORE, MARYLAND–Verizon is ramping up its immersive public safety tech showcase, in a major expansion of its Operation Convergent Response event.

Last year, Verizon had 17 companies involved with the event, according to Jeffrey Schweitzer, Verizon’s assymetric solutions architect in its Public Safety Strategy group. This year, OCR is being scaled up to support about 1,600 attendees and 250 vendors.

Verizon has been running the annual event for a number of years, where it stages small-scale disasters, 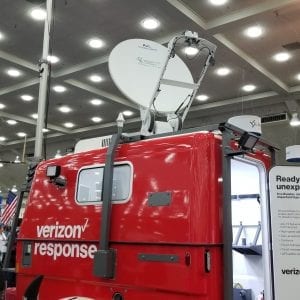 such as a terrorist attack and mass shooting, as an immersive experience highlighting its network capabilities and new public safety tech.

Last year’s event at the Guardian Centers in Perry, Georgia, featured scenarios including a 40-minute subway attack exercise, a highway vehicle pile-up, an active shooter situation, a helicopter crash and an earthquake, as well as a nuclear detonation. Verizon’s partners for the event included Nokia and Aegex Technologies.

Verizon is partnering with Nokia again on the event, which will be held in late November, Schweizer said.

Schweitzer, a former Army communications expert, described this year’s OCR event in a session at APCO 2019, as part of a discussion around how his team focuses on collaboration to solve public safety problems, while it also looks toward the future of such communications.

“When things go really bad, the only way that we solve things is, we come together and we create better solutions by working together,” he said. In terms of both technology development and potential threats, Schweizer added, “so many things are happening that it’s very difficult to keep up with” — which makes collaboration and real-world input even more important.

“We really have to think about, what does it really mean when you have all of these technologies, and how can we better use the capabilities to do things that we didn’t think would be possible,” Schweizer said.

He also said that Verizon has been focused on how to “bring fact-based intelligence to the table, regardless of where the table happens to be.” That includes efforts such as three-dimensional models of cities and other response zones, including maritime and subterranean environments, that integrate with Verizon’s real-time response platform.

He said Verizon also has focused on how to convey information to a new generation of public safety workers, building a first-person avatar set-up where personnel can train and gather information, as well as exploring artificial intelligence as a route to providing verified information on which personnel can base decisions without having to sort through massive amounts of data.

The OCR event is a way to put tech into real-world first responder scenarios, “push it really hard and see if it breaks,” Schweizer said. While the event in the past has focused primarily on initial response, he said that particularly since the wildfire response in Paradise, California, Verizon has taken into account both the secondary and tertiary responders and long-term needs for rebuilding, along with the short-term emergency response.

This year’s scenarios are more complex, often combining several aspects and drawing on actual attacks that have occurred in recent years — such as a multi-pronged terrorist attack in a city. OCR 2019 will include a cyberattack on a municipal dam and power grid, resulting in a rapid release of water into a neighborhood; drone incursions in an airport’s airspace; a complex urban terrorist attack; a wildfire response; a roadway tunnel crash and fire; and for the first time, a nighttime exercise: a fuel pipeline explosion. After all, Schweizer said, disasters “don’t happen just when the sun is shining.”

The wireless infrastructure industry is poised for the next … END_OF_DOCUMENT_TOKEN_TO_BE_REPLACED