The new MVNO kids are the block have set their sights on the coveted postpaid market, and they are succeeding in capturing a large chunk of growth while offering an experience that generally meets and can even succeed the experience of the underlying network(s) that the MVNO runs on, according to a new report from Tutela.

“Comcast and Charter’s wireless plays have seen MVNOs disrupt the lucrative postpaid market for the first time,” the company said in the report.

Traditionally, mobile virtual network operators who buy wholesale access to operator networks and re-sell it have “carved out a niche largely serving the needs of lower-income customers or those with particular data needs,” Tutela noted. But now, it says, the landscape is shifting. And the new crop of modern MVNOs have a few tricks up their sleeves that weren’t available to the slew of high-profile, postpaid MVNOs that popped up and subsequently imploded during the mid-aughts (Amp’d, Helio and Disney Mobile come to mind).

In the new report, Tutela analysts Chris Mills and Fiona Armstrong write that “Technological advancements have made the barrier for operating some kind of network much lower; the entrance of cable companies into the market have pushed MVNO service into the more lucrative postpaid segment; and multi-network MVNOs are innovating on the network side of the equation, rather than solely differentiating on price or customer service. Multi-operator MVNOs can compete on user quality of experience, as well as factors such as price and customer service.”

For instance, Tutela found that Google Fi’s service, which runs across T-Mobile US, Sprint and US Cellular’s network, actually outperformed both T-Mobile and Sprint’s prepaid brands “by a significant margin” in its Consistent Quality metric — most likely because Fi uses dynamic network switching, so it shifts user devices on to the network that offers the best experience based on a user’s location.

Cable-backed MVNOs Xfinity Mobile (Comcast) and Spectrum Mobile (Charter Communications) captured nearly 50% of the postpaid subscriber growth in the second quarter of 2019, Tutela said, and between the two of them, added nearly as many postpaid subscribers as their host network, Verizon. Tutela added that its data “suggests that Xfinity Mobile has already succeeded in offloading over 6% of smartphone data traffic onto its Wi-Fi network – far more than any other network.”

Tutela relies on crowd-sourced, device-based data for its analysis; it draws data from more than 3.8 million iOS and Android smartphone users. The company said that for this report, it gathered more than 281 billion measurements between February 1 and July 31 of 2019, including more than 40 million speed tests and 649 million latency measurements. Tutela assessed MVNO performance in two categories: Consistent Quality and Common Coverage areas.

In general, Tutela said, the performance that MVNO customers experience closely mimics that of the host network — but metered or speed-limited service is very common, particularly among low-cost MVNOs. Device-based measured performance, then, reflects what the user has paid for rather than the network’s full capability.

While all four mobile network operator networks outperform the MVNOs that operate solely on their networks when it comes to the highest rating (Excellent Consistent Quality), Tutela said, there are some differences in results for Core Consistent Quality, where Xfinity Mobile and Spectrum Mobile actually outperform host network Verizon. This, the company said, is “attributable to the different approaches networks take to traffic management, as well as the mix of prepaid and postpaid subscribers and geographical differences in where customers are located.” 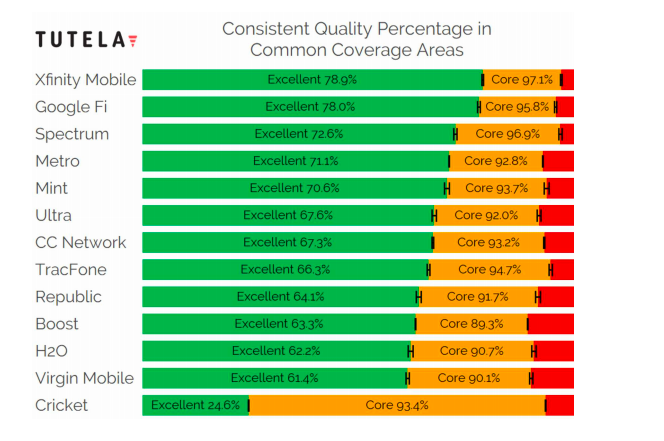 There’s another new MVNO market entrant to keep an eye on as well. While Altice just launched its MVNO in September and Tutela says it’s too early to evaluate the quality of its offering, the service “has several of the key features that Tutela has identified in other successful MVNO plays, including a widespread and fast Wi-Fi network, a multi-operator MVNO agreement, and highly competitive pricing. … Altice is poised to make waves in the market.”

The wireless infrastructure industry is poised for the next … END_OF_DOCUMENT_TOKEN_TO_BE_REPLACED