LOS ANGELES, California — There were gator chomps, a stuffed marmot and Monty Python jokes. Software defined radios “hulked out” or helped each other out, jockeying for position in crowded spectrum and ultimately proving that they could perform as well or better than LTE in ad hoc collaboration for using the available airwaves.

In the end, the winning team narrowly missed elimination twice before pulling ahead in the final match-up,  to walk away with a $2 million prize by the narrow margin of a single point. Gatorwings, a team of professors, Ph.D students and undergraduate students from the University of Florida, were the final victors in the Defense Advanced Research Projects Agency’s three-year Spectrum Collaboration Challenge, which was launched three years ago to explore the efficacy of using artificial intelligence-powered software-defined radios to enable ad hoc dynamic spectrum sharing rather than the traditional approach of static allocations decided upon by humans.

SC2 came down to this question, according to DARPA SC2 Program Manager Paul Tilghman: How do you create a radio that thrives in a world without the protection of the Federal Communications Commission? DARPA, he said, had seen the writing on the wall a decade ago on the question of how to support all of the competing spectrum needs of industry, government and consumers a decade ago, recognizing that in order to address all of those needs, new strategies and technologies were needed.

“All the easy answers to this question are gone, and there really is no more low-hanging spectrum fruit,” he told the audience at MWC Los Angeles — where on the show floor, the industry was showcasing technology including the use of the Citizens Broadband Radio Service, with its three-tiered spectrum-sharing approach.

Also on the show floor was the Colosseum test bed, a massive construction of software-defined radios glowing under neon lights. Colosseum, which was created specifically for the SC2 grand challenge, was trucked across the country from Maryland so that the last few rounds of the competition could be held live on-location — and this was the first chance that competitors got to actually see the test bed in person, since previous rounds were conducted virtually, with the results presented to the teams at a later date  (See RCR’s coverage of last year’s SC2 qualifying event here).

At the conclusion of the challenge, Tilghman declared that “for the first time, we’ve seen AI-enabled radios … unlock the true potential of the RF spectrum.” Competitors packed 3.5 times more wireless signals into the spectrum than current capabilities with static or coarse spectrum-sharing, and demonstrated performance even better than LTE. Collaborative, dynamic, AI-based spectrum sharing, he said, can mean a shift from spectrum scarcity to spectrum abundance.

Ten teams made it to the third year of the challenge, which was whittled away to five during the course of the afternoon at MWC. The SC2 spectrum-sharing scenarios ranging from a team of soldiers roaming the streets of Austin, Texas; a disaster relief scenario with three nodes across a city focused on spectrum re-use; a wildfire response scenario with users on the ground as well as in the air, where the radios had to dynamically prioritize traffic; a high-traffic public environment; and a “trash compactor” scenario where the amount of available spectrum was reduced in stages from 20 megahertz to 10 megahertz to 5 megahertz to test how the radios handled consistent traffic in an increasingly congested spectrum environment.

Watch one of the match rounds below:

Tilghman and Ben Hilburn, director of engineering for DeepSig and president of of GNU Radio emceed the event, with help from Mythbusters host (and electrical engineer) Grant Imahara. The three broke down the details of the testing visualization for the audience through the elimination rounds, showcasing particular highlights from rounds which had already been conducted in the Colosseum and leading up to the last four rounds, which were drawn live from the test bed.

The contest was a close one right through the final four rounds, with Gatorwings finally coming out on top y just one point over the second-place winner, MarmotE, a team of current and former Vanderbilt University researchers. The top three teams won cash prizes. Zylinium, the third-place finisher,

The software-defined autonomous radios had to show that they could provide stable service, protect incumbents, and collaborate among each other to share the airwaves. It was a formidable task, one that each team handled in its own unique way and one that they ultimately managed to accomplish successfully.

DARPA hopes the SC2 work — and the community built by researchers and students coming together to tackle the challenge — will live on and shape the future of the wireless industry.

“I think we just came out of a spectrum-sharing winter,” Tilghman said at the close of the event — and now, with the close of SC2, the challenge is to push the technology and strategic approaches taken by the participating teams closer to being adopted in reality. Colosseum will become a national testing asset; it will physically reside at Northeastern University and will become part of Northeastern’s Institute for the Wireless Internet of Things. Some of the successful SC2 participants will continue their work with support from the National Science Foundation’s PAWR program, including tests anticipated to happen next year at the POWDER 5G test bed in Salt Lake City. The tests are anticipated to include the use of the SC2 AI decision engines to manage the spectrum use of standard 5G radios. 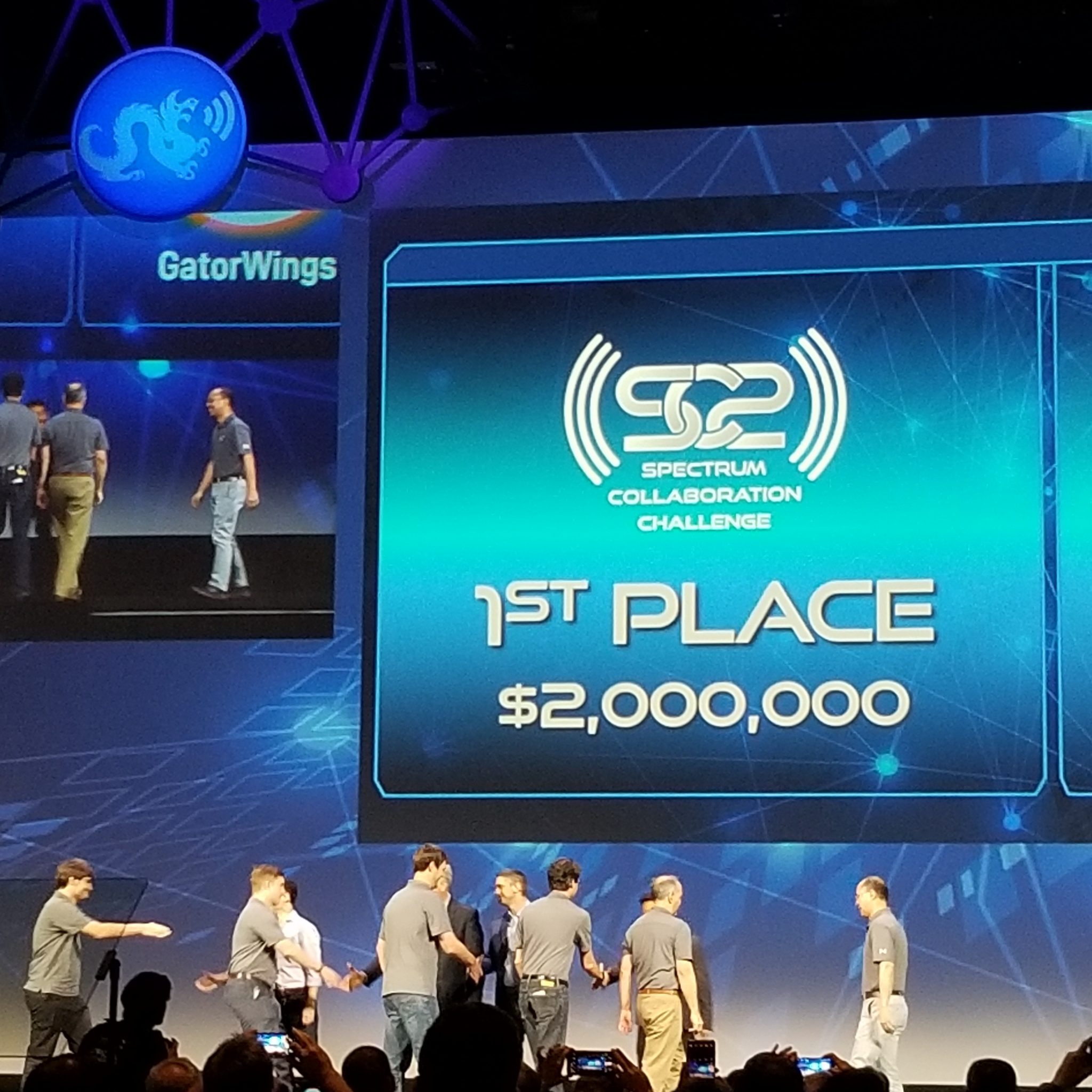 Members of Gatorwings take the stage after their win. (Kelly Hill/RCR Wireless News)

The wireless infrastructure industry is poised for the next … END_OF_DOCUMENT_TOKEN_TO_BE_REPLACED