The FirstNet network operated by AT&T has been accepting subscribers for more than a year now, with service offered across all of AT&T’s commercial spectrum bands, a private network core for public safety users and Band 14 coverage built out in about 650 markets across the country as of the carrier’s most recent update.  First responders and other agencies and organizations which support emergency operations and disaster response — police and fire departments, emergency medical services organizations, school districts, hospitals and so on — can sign up for individual or department-sponsored plans, and there are more than 130 devices, ranging from modules to smartphones to tablets and laptops, which are approved for FirstNet use. 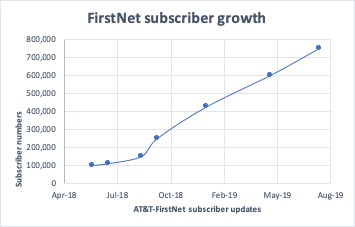 FirstNet’s subscriber base has been growing – sometimes quite rapidly — since AT&T made its services available in mid-2018. According to AT&T’s last update in August 2019, there are nearly 9,000 agencies and organizations which have subscribed to FirstNet, and more than 750,000 FirstNet connections, a number that the carrier says is “growing daily.”

AT&T said that it has so far built out 650 markets with Band 14 coverage, and that it’s about 65% of the way through its contracted coverage area requirements for FirstNet, expecting to reach 70% by the end of this year. The carrier has said that it anticipates rolling out 3GPP-standards-based mission-critical push-to-talk (MCPTT)in its network by the end of this year as well.

The carrier announced last Friday that Chris Sambar, who has headed up the carrier’s team responsible for constructing and managing the FirstNet network since AT&T won the FirstNet contract, will be moving into an executive network position for the company as a whole. Sambar has been promoted to the role of executive VP, AT&T Technology Operations, responsible for both wireless and wireline network planning, investment, engineering, construction and operations for AT&T’s consumer, business and government customers. His role at the FirstNet program will be taken over by Jason Porter, a fellow military veteran who has been working at AT&T in the role of chief data officer and SVP for strategic planning for AT&T’s Technology Operations, where his responsibilities have included prioritization of over half of AT&T’s capital spending.

Interested in hearing more on FirstNet, particularly related to in-building coverage for public safety? Join RCR Wireless News for a webinar on the topic and keep an eye out for our special report to be posted later this week.

The post How fast is FirstNet growing? appeared first on RCR Wireless News.

The wireless infrastructure industry is poised for the next … END_OF_DOCUMENT_TOKEN_TO_BE_REPLACED