The rise of new technologies such as 5G is profoundly influencing the communications market and driving operators and equipment vendors to rapidly evolve with respect to technology architecture and organizational structure. In the 5G environment, the demands from user are diversified, and the global network is being changed and reconstructed as technology evolves.

In the 5G era, the new services are becoming more demanding for the network that carries them. Features, such as flexibility, easy to expand and easy to use, have become basic capabilities that the carrier network should have. 5G follows the basic principle of separating forward from control. With respect to the 5G network architecture, the principle is displayed in the following: data plane deployment to the edge, control plane concentration, and a large number of distributed gateways. This requires that hardware or software switch of a 5G distributed gateway cam play an important role in services such as flow diversion, priority processing, high reliability, and low latency communication.

Because SDN has so many advantages, major manufacturers have launched their own SDN solutions. Among which, the open source community’s OpenFlow solutions, and EVPN solutions represented by Cisco, Juniper and other hardware manufacturers, have gradually become the mainstream of the market.

The core of the forwarding layer in the OpenFlow network consists of switches that support OpenFlow software and hardware, and the layer is responsible for forwarding data packets. Each software or hardware switch that supports OpenFlow has a FlowTable. The switch itself forwards data packets only according to the contents of the flow table. The SDN Controller is responsible for generating, maintaining, and delivering the FlowTable. The OpenFlow specification defines more than ten keywords from L2 to L4, and each keyword in the FlowTable can be wildcarded. Which matching rule is used in a specific network is determined by different usage scenarios. For example, in a pure layer-2 networking environment, only fields in the layer-2 need to be matched, and other fields can be wildcarded.

Compared with the packet processing flow in the traditional network, the flow direction in the traditional switch is manually designated by the configuration. There is no concept of data flow, and only packet-level switching and routing processing are implemented; and in the OpenFlow network, the delivery of all network-related configurations is replaced by the SDN Controller through the delivery flow table. This determines the transmission path of all packet flows in the network. The entire system is shown below: 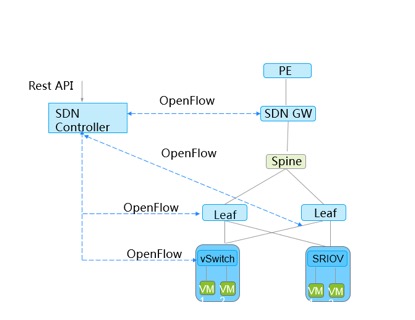 EVPN (Ethernet Virtual Private Network) is a multi-protocol address mapping standard. By using BGP as a routing protocol, and in combination with EVPN, it can bring a complete control plane to VXLAN. The idea is different from the centralized flow table delivered in the OpenFlow mode. The original VXLAN based implementation solution has no control plane. Through the flooding of the data plane, VTEP is discovered, and MAC address learning results in the flooding. VXLAN introduces EVPN as the control plane to solve the original flooding problem. The BGP EVPN routing information is exchanged between VTEPs to implement automatic discovery of VTEP and mutual notification of host information to solve the previous flooding problem.

EVPN inherits the advantages of both MP-BGP and VXLAN, and it usually adopts the layered architecture of GW-Spine-Leaf. The device at the leaf layer performs the EVPN-related processing on the packets as the VTEP. The core device in the Spine layer forwards the packets according to the destination address of the packets. The GW, which acts as the gateway device, is responsible for forwarding the DC traffic and encapsulating/decapsulating the VXLAN tunnel. 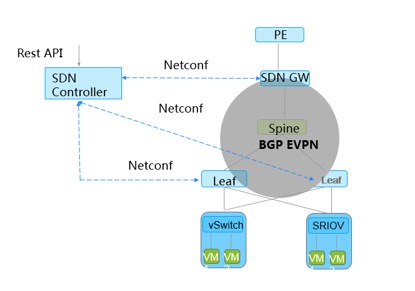 Table 1: Contrast of Features of OpenFlow and EVPN

The post Is OpenFlow or EVPN the SDN mainstream solution? appeared first on RCR Wireless News.

The wireless infrastructure industry is poised for the next … END_OF_DOCUMENT_TOKEN_TO_BE_REPLACED