For the last few years, Sky Light Research has written articles on the progress of microwave backhaul for 5G networks.  It’s clear that capacity, low latency, and network management functionality are required for the complexity and versatility of a 5G network.  Microwave manufacturers have checked each of these boxes in their 5G offerings, however, the next step is how to do this economically while meeting the OPEX/CAPEX budget marks.  As with most technological advancements, the costs become more refined as lessons are learned from real life deployments.

Reducing cost per megabit, while increasing capacity has been a large focus in progressing microwave technology.  Although there are several ways in which to achieve this, E-Band radios is one way that is gaining a lot of traction.  Cost per megabyte is lower for E-band, due to the channel sizes in E-band (hence, larger available capacity), and lower licensing costs.  E-band runs in the 70-80 GHz spectrum and is able to carry up to 10 Gbps in a single channel.  While E-band is able to transport gigabits of data economically, it is not able to carry the signal more than a couple of miles.  E-band’s higher frequency prevents longer link distances and contributes to decreased reliability due to spectrum characteristics.  However, when an E-band radio is combined with a traditional band (6 – 42 GHz) microwave radio, the new link takes on the best characteristics of the traditional microwave radio (link distance and reliability) and the E-band radio (capacity) and is able to reliably carry gigabits of capacity several miles.  To facilitate additional capacity, multi-band radios are starting to be used as an alternative to traditional 15/18/23GHz microwave radio solutions, as multi-band radios are able to increase capacity up to 20x while maintaining similar levels of overall link availability.  The figure below illustrates how reliability, distance, and capacity leverage one another in a combined multi-band link. 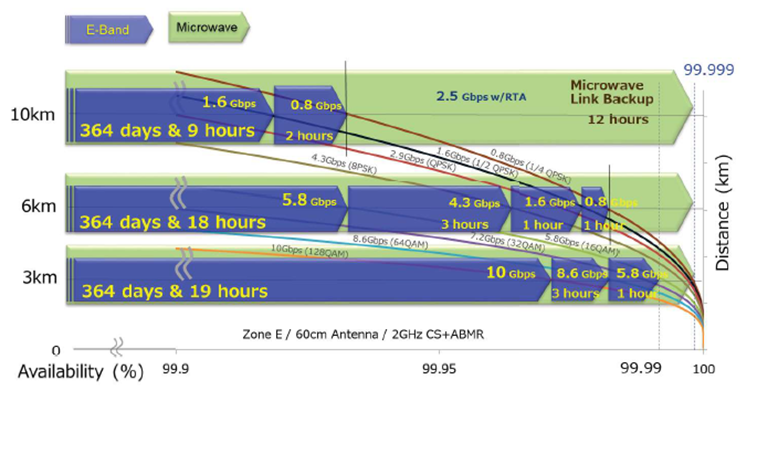 Multi-band radios are getting a lot of interest from service providers who are exploring more advanced or 5G networks, especially since microwave links have historically offered a competitive TCO when compared to fiber.  The following chart shows costs from one network in Germany comparing microwave to dark fiber and new fiber lines. 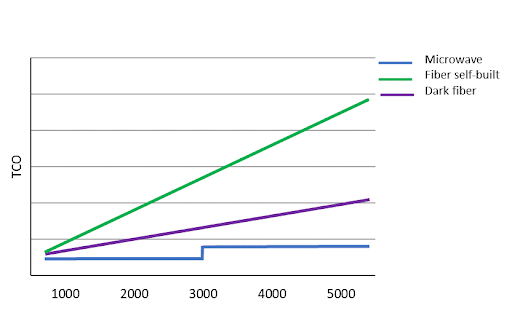 Thus, when fiber is not available, or the TCO is the issue, then microwave will be used in 5G networks.  Multi-band radios, which carry 10 Gbps capacity, cover up to 8km and have 99.999 reliability, will be a leading solution.  Research is ongoing to move beyond the 80 GHz band to the W and (75 -110 GHz) or D band (130-170 GHz) which will push capacity beyond 10 Gbps.  The chart below highlights the main attributes of prominent microwave frequencies. 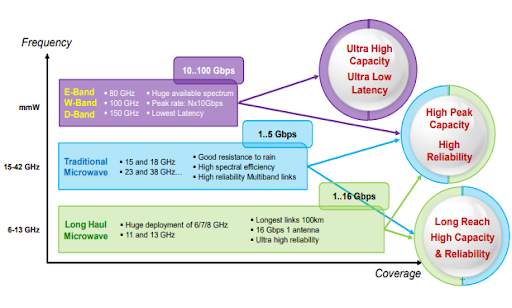 While almost every microwave manufacturer has a multi-band solution, newer solutions integrate both radios into a single unit, making it more cost efficient.  At the beginning of August, Aviat Networks introduced a single unit multi-band radio – the WTM4800.  The radio combines a microwave radio and an E-band radio into one single unit, bypassing couplers, and other ancillary equipment needed to combine two radios into one link.  Additionally, the radio is using a dual band antenna, which further reduces the amount of equipment and footprint on the tower, resulting in less capex and lower reoccurring tower costs which saves on TCO.  Priced at about 10 percent more than an E-band radio, the cost per gigabit is economical, with a longer, more reliable link and lower tower rental costs.  Aviat has combined the radio with their network design software program, which is distinct in that it allows the network planner to consider the combined microwave and e-band link.  Their link planner tool treats the multi-band radio as one unit, not just as a microwave link or just an e-band link but considers both frequencies together and takes them into account for link design, saving the network design team effort and time in manually calculating combined link capacity and availability.

Some vendors have approached multi-band radios with two units, which can be beneficial, since it can be added incrementally, as needed, to an already deployed radio.  Thus, more capacity can be added to a microwave link, or more distance can be added to an e-band link.  Ericsson does this with their miniLINK radios.  Ericsson’s approach takes two separate radios, and with the dual band antenna, they are able to achieve 20 Gbps capacity while reducing footprint by 70 percent on towers.

SIAE’s solution involves coupling several ODUs together, via IF or Ethernet cables. They use the ALFOplus80HDX (80GHz) with either the AGS20 (split-mount) or the ALFOplus2 (full outdoor), which links together a 2+0 XPIC standard frequency bands with a 10 Gbps single channel resulting in a 3+0 link, over a single antenna.

Ceragon’s approach uses their IP-50E, which has extended E-band reach due to its multi-band capability. Using layer-1 carrier bonding, the IP-50E can be combined with Ceragon’s IP-50C or IP-20C radio and a multi-band antenna, providing an all-outdoor, direct-mount 3-carrier solution (single-carrier E-band + two-carrier microwave). Alternatively, the IP-50E can be combined with a fiber or leased line connection as well.

Nokia uses a combination of its Wavence’s UBT-S (single carrier microwave) or UBT-T (dual carrier microwave) and UBT-m (e-band) for its multi-band radio solution.  The solution focuses on telco-grade reliability and low-latency transport. Since it supports multiple frequencies in the same equipment, it can be paired with a multi-band antenna, further condensing its tower footprint.

There are several reasons why dual band antennas and highly integrated radios are key.  One is obvious – more equipment means higher costs – not only in capital expenditures but also operational expenditures.  The more pieces there are to manage, the more complex the network becomes, and the more difficult it is to not only manage but also to install.  Thus, fewer pieces of equipment means faster time to market and higher operational efficiency.  The second reason that integrated, dual band antennas lower the overall cost, is that tower space is very expensive. Like the tower costs for microwave radios, tower costs for antennas are based on weight load, footprint, and shelter requirements so the less space an operator takes up on and around a tower, the lower the rent.  It’s easy to see how quickly costs can escalate, when you start to multiply extra boxes, couplers, cables, and rental space, by hundreds of towers. Not having the right equipment, can easily disrupt the profit model.

Although 5G networks are still nascent, the equipment that will support it is starting to roll out, while older networks are being modernized to support more advanced data streams.  This trend towards higher capacities is apparent.  Looking at the chart below, the steady climb of e-band along with higher capacity is clear.  Capacity in the 400 Mbps -1 Gbps range is the bulk of microwave radio revenue, but in 1Q 18, SLR saw a shift to 1+ Gbps radios starting to take place and has steadily progressed over the last four quarters.  Sky Light Research forecasts that higher capacity demand will continue to accelerate over the next five years. 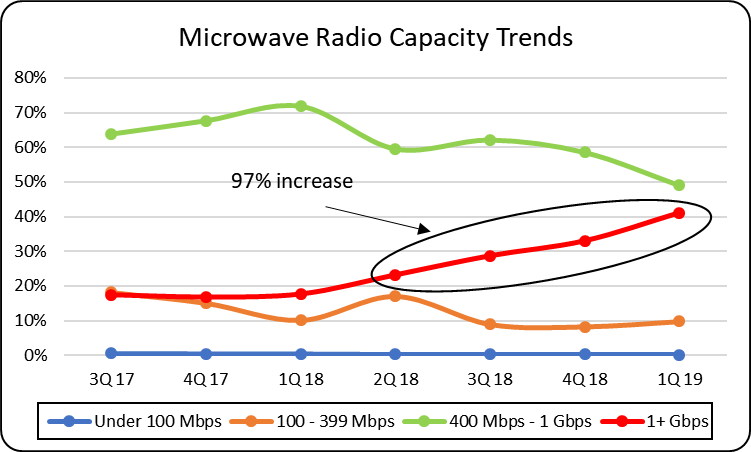 In summary, capacity will be the main driver, but capacity needs to be met with an increasing importance on reliability along with a sound TCO business model.  Although regulatory issues play a large role in the global market demand curve, microwave manufactures are continually advancing their radios and nascent multi-band radios and dual band antennas are making the microwave capacity/TCO effect hard to ignore.

The wireless infrastructure industry is poised for the next … END_OF_DOCUMENT_TOKEN_TO_BE_REPLACED