Even as the mobile industry steps into a 5G world where it is making use of millimeter wave frequencies for commercial cellular services, some are eyeing even higher — and more plentiful — spectrum resources.

Test company Rohde & Schwarz said this week that it is supporting research by Japanese carrier NTT DoCoMo to look at the potential of spectrum up to 150 GHz and begin conducting channel sounding experiments to characterize those bands, in what R&S said was the world’s first ultra-wideband channel sounder for mobile communications exceeding 100 GHz.

“The frequency bands from 100 GHz to 300 GHz are expected to enable further high-speed and large-capacity communication for the next generation beyond 5G,” Rohde & Schwarz said in a release, adding that the spectrum bands between 100-300 GHz offer even wider bandwidths than those available for 5G. However, those bands are also even more likely to be strongly affected by path loss and blocking by objects and weather such as rain, necessitating research into exactly how they behave.

The work included propagation experiments in an anechoic chamber at up to 150 GHz, measuring and 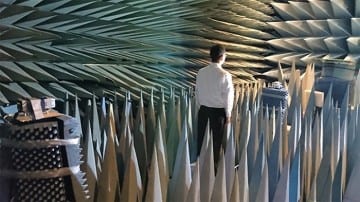 analyzing radio wave propagation characteristics and “shielding effects” such as blocking by the human body. DoCoMo used Rohde & Schwarz’s SMW200A signal generator with its SMZ frequency multiplier to generate the signal, and the R&S FSW85 signal and spectrum analyzer with the R&S FS-Z170 harmonic mixer for analysis, with analysis bandwidth of up to two gigahertz. Measurement parameters include the propagation loss, the power delay profile (or the arrival time of radio waves), and the angular profile, an indicator of radio wave arrival, according to Rohde & Schwarz.

The two companies said that they confirmed that they can measure and analyze the shielding effect of the human body at signals up to 150 GHz and “in all common 5G frequency bands currently in use of under consideration” and described their overall work as “[contributing]to the realization of terabit-class mobile communication systems.”

Other recent work to further exploration of higher gigahertz and terahertz spectrum that could one day support “6G” wireless includes the Defense Advanced Research Projects Agency-sponsored  Joint University Microelectronics Program, which includes a group called the Center for Converged TeraHertz Communications and Sensing; and academic research supported by National Instruments of broadcast transmission at 264.7 GHz and 322.5 GHz.

The wireless infrastructure industry is poised for the next … END_OF_DOCUMENT_TOKEN_TO_BE_REPLACED