As Rakuten, Japan’s newest mobile operator, joins the market with a new network build-out, the carrier will be using Viavi Solutions’ TM500 system to help with end-to-end validation of its cloud-native mobile network.

Rakuten is aiming for an October 2019 launch of 4G services and has a network deployment plan that Viavi described as “a cloud-based architecture, from the RAN to the core, an industry-leading level of automation, and collaboration with the top vendors in the mobile ecosystem.”

Rakuten will use Viavi Solutions’ TM500 offering for user equipment simulation in its operator lab for stressing its network from end-to-end. Viavi said that the scalable system for validating network performance (as experienced by end users) across multiple cells and radio access technologies is the “de facto standard across the world”. The test company added that recently released features for the TM500 include uplink multiple-input multiple-output on two layers; downlink 8×8 MIMO; millimeter wave support and support for multiple UEs on 5G; and two downlink carrier aggregation at 120 kHz and 240 kHz.

Meanwhile, Keysight said that in partnership with Samsung, it demonstrated maximum achievable 5G NR data throughput performance with its network emulation offering. The two companies have been working together on 5G development for two years, Keysight said. The achievement “marks the successful completion of full stack interoperability and development test  based on the 3GPP 5G NR release 15 specifications,” the company said, adding that the demo leveraged 256 QAM modulation and 4×4 MIMO for verification of the data throughput rates.

-Test company Accuver said that it has delivered a narrowband internet of things and LTE Cat-M1 testing system that can support Sequans’ Monarch chipsets to an unnamed “emerging U.S. carrier.” Accuver said its offering has supported Qualcomm and HiSilicon chipsets since the spring of 2018 and that the addition of the exclusive relationship with Sequans means that Accuver is the only vendor among its peers with that range of support.

Accuver also said this week that in addition to its network transmission test equipment, Korean carrier LG Uplus — which recently launched its 5G NR network — will also use Accuver’s big data solutions for network management. Accuver describes its 5G Aegis, the company’s integrated network test and measurement system, as “a big data analysis and statistics system that provides real-time data of the statistical analysis of measured values for all types of network operation, including regional/service/subscriber/service host through the user interface, after testing and measuring large amounts of communication data generated by each network segment on time basis.” The company added that the system can also act as a solution for “maintaining and enhancing the performance of complex networks mixed with diverse communication technologies by supporting collectively the performance testing, analysis and statistical functions for existing 3G/4G networks as well as 5G.”

–Ethertronics has developed a system for testing 5G millimeter-wave antennas and devices that it says is compact, accurate and portable. The system uses far-field measurements in an shielded anechoic chamber, and Ethertronics said that it works with equipment from manufacturers such as Keysight, Rohde & Schwarz, and Anritsu and requires no up or down frequency conversion to ensure phase stability and accuracy.

The ETH-MMW-1000 Millimeter Measurement System is an enclosure on steerable lifting wheels, has sliding doors for access to the center of the system and rotating components to enable device testing.

-Along similar lines, Rohde & Schwarz said that it has put together a test set-up that enables three- 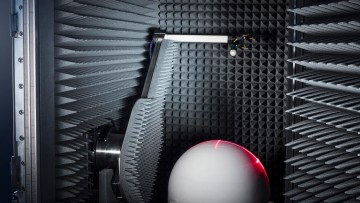 The R&S ATS-TEMP consists of a semisphere-shaped dome and is used inside the R&S ATS1000 antenna test system. (Image: Rohde & Schwarz)

“Thermal effects diagnostics on devices under test are crucial when analyzing the effect of temperature on chipset and UE performance, since device heating or cooling can affect the RF components and consequently the radiation pattern of the antennas,” Rohde & Schwarz noted.

The wireless infrastructure industry is poised for the next … END_OF_DOCUMENT_TOKEN_TO_BE_REPLACED