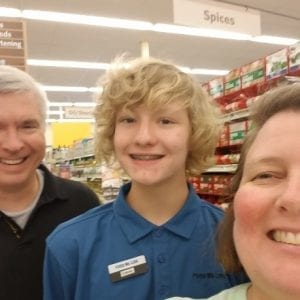 Greetings from Lake Norman/ Davidson, North Carolina where everybody is working (including the neighbor kid, Caleb, pictured with the Editor and yours truly). This week, we’ll look at two studies that examine data usage, and try to deftly explain AT&T’s efforts to improve their cost structure and competitive cloud position. But first, a follow up from last week’s column.
Follow-up Idea to the Apple Card TSB I did not anticipate the overwhelming response the Apple Card TSB would receive (Craig Moffett did a mid-week post on the concept and CNBC picked it up here). I have had about a dozen in-depth conversations on the Apple Card TSB this week with several of you and I think we have come up with the ideal suggestion for Apple: 2x Daily Cash towards your monthly phone payment. So, if you get 2% back from using Apple Pay (say $2 on a $100 grocery purchase), that would become $4 towards your monthly phone installment. There could also be an incentive to pay the phone installment first or sooner.

This promotion would reward existing Apple users with a new phone just from using Apple Pay (or buying other products from the Apple family, or just using the physical card), and would be a way for existing Android users to make the switch to Apple for a discount (or to lessen the blow of being underwater from a low trade-in value). The opportunity to “earn” your way to a free iPhone increases Apple Pay (or card) usage, which increases value, etc. And, customers would have the ability to worry less because their phone is never locked to a wireless carrier. Not that the marketing department at Apple needs any help, but if this ends up being the incentive, you heard about it first in TSB.

There’s a Deeper post on the Apple Card that might be very useful for those tracking the topic closely. Thanks for all of the ideas and please keep them coming.

Two “A Ha” Reports This Week Generate Minimal New Insights Meanwhile, we had two “a ha” reports come out this week. The first was a supposed “scoop” from the Wall Street Journal that customers were being duped by their internet service provider (AT&T, Comcast, Time Warner Cable, others) into paying more for higher throughput speeds and receiving nothing in return. This was not a passing consumer interest story, but had substantial article placement, a video, and even a podcast to support it. (Both the video and the podcast take more time to analyze the complete array of things that could contribute to slower speeds in the home, such as interference or neighborhood congestion, and, inadvertently, make a very strong yet indirect case for paid prioritization).

At TSB, we seek first to understand, but at the end of the day, it’s very difficult for us to have as much excitement as the Wall Street Journal did about possible overpayment for the following reasons:

impact than the $10-20/ month being paid for a premium tier. Consumers should spend their time wisely. 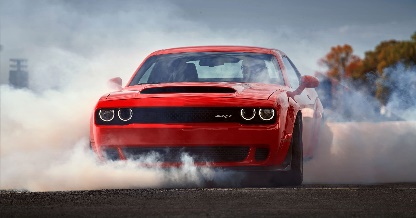 Bottom line: There’s nothing wrong with 1Gbps speed even if you don’t need it. There’s also nothing wrong with buying the nearby Dodge Challenger SRT Demon (840 hp – don’t we all need one?) if you can afford that. Faster Internet speeds from your ISP could help, and so could a new Access Point or Cable Modem.

The second study that came out this week deserves more attention because of its sample size and implications to the industry. The University of Massachusetts and Northeastern University used a mobile app called Wehe to track the Internet usage patterns of 126,249 mobile users over several months (over 1 million samples). The summary (which is not surprising to most cellular users) is that average speeds for popular sites such as YouTube and Netflix are slower than expected. Here’s a summary chart of the findings for AT&T and Verizon (June 11, 2018 is the day that Net Neutrality rules were made optional) : 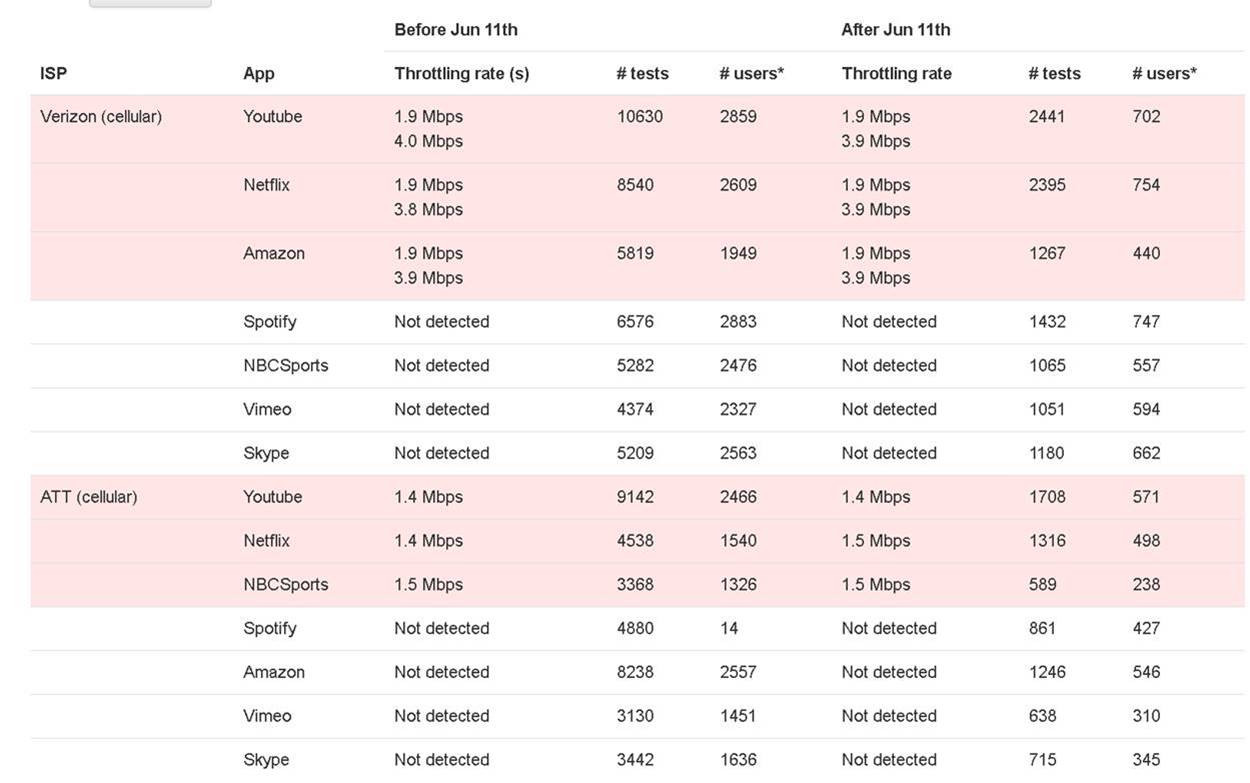 What this shows for Verizon is precisely what we discussed in last week’s TSB:  480p customers get consistent YouTube data throughputs at 1.9 Mbps, and 720p customers receive YouTube data throughputs at 4.0 Mbps.  This is consistent with their advertised plans (why NBC Sports and Vimeo are not included in the throttle was probably the topic of several Verizon Wireless staff meetings this week).  I am sure if they were to upgrade a device to 1080p throughout, they would have a third tier that shows around 8-9 Mbps.  For the record, AT&T has disputed the findings and CTIA in 2018 issued a statement disputing the findings.

Bottom line:  If you want video resolution that matches the maximum capabilities of your smartphone, you might have to pay more.  To last week’s comment, this could be a differentiation point for one of the challenger carriers (e.g., T-Mobile resuming their un-carrier ways and making 720p or 1080p the new “basic” video viewing tier).

Condensing AT&T’s Network and Business strategies into one TSB is a challenge because of the breadth of problems they are attempting to solve.  Unlike the AT&T of the 1990s (more focused on communications innovations like the Internet and mobile), this generation’s AT&T is much deeper and comprehensive (focusing on information delivery, relevance, timeliness, analysis, and action).

It’s important to remember that AT&T as we know it today is really a 12+ year-old company.  BellSouth was formally acquired at the end of 2006 and with that came the formation of “The new at&t”, replacing Cingular Communications.  That was followed by a substantial network integration project which ended in 2009.  While we think about AT&T as a legacy brand, the common platform that we see today is only a decade old.

As we discussed in a TSB a few weeks back, mobile growth contributed to fiber infrastructure growth.  More towers and small cells spawned additional conduits, trenches, and pole attachments.  All of this data needed to be stored and processed, and server farms led to cloud computing sites and eventually hyperscale data centers.  The infrastructure and mobile landscapes changed dramatically with LTE network demand.

What didn’t change as quickly were the network operating systems and business processes that determined the efficiency and profitability of AT&T.  Integration was the exception rather than the rule, data needed to solve customer problems was available to some departments and not to others and obtaining merger synergies by negotiating better rates with the same menagerie of vendors (often with extended terms) made breakthrough change harder to achieve.  Growth was hindered by incompatible product roadmaps and the quantity of equipment required to accommodate data growth was becoming untenable.  Something had to give.

In 2013, AT&T began the painstaking process of separating computer processing from separate software development/ integrations for each of its network vendors with the introduction of Domain 2.0 (see whitepaper here).  The picture below from the whitepaper summarizes AT&T’s direction and provides a good roadmap for their recent Microsoft, IBM, and Dell announcements: 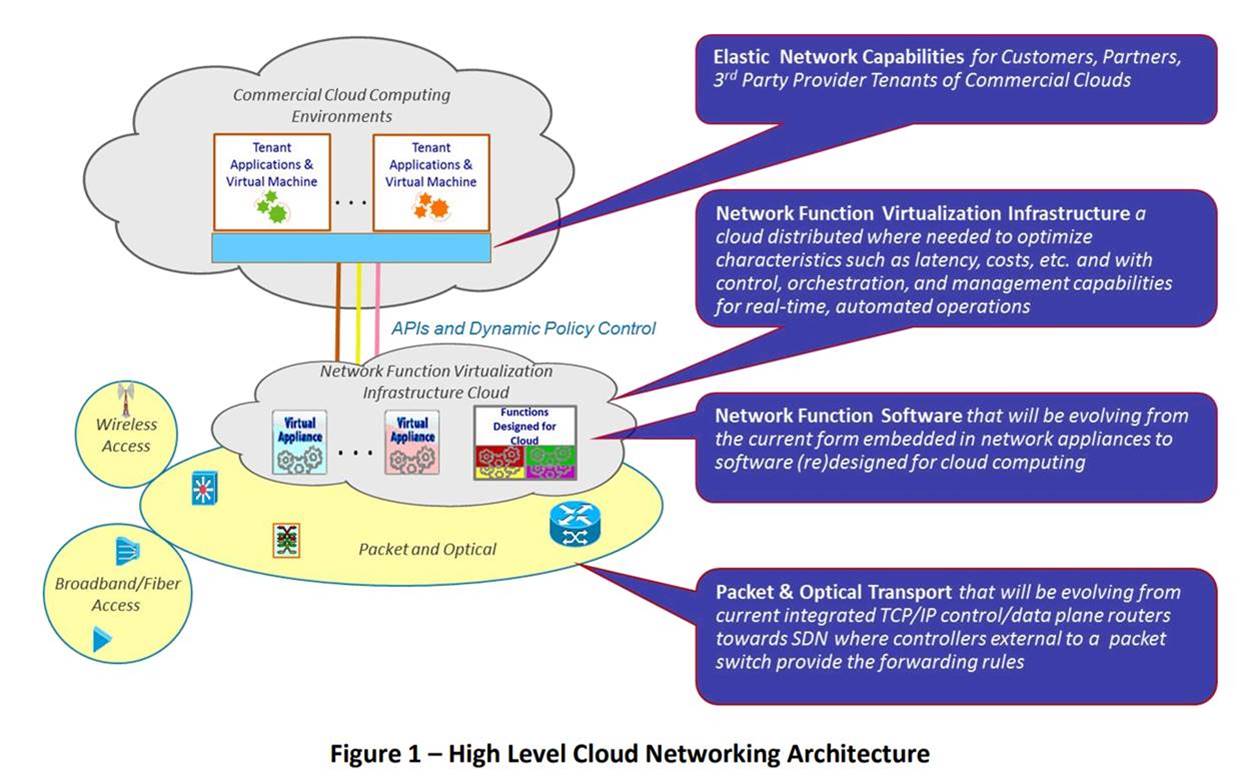 Routers (Cisco and Juniper being AT&T’s main providers) and optical infrastructure (Ciena and Cisco) were the first focal points of Domain 2.0, and it manifested itself in the creation of a mobile packet core.   Key Domain 2.0 vendors as of the end of 2015 were Cisco (via their Tail-F Systems purchase), Ericsson, Nokia (with Alcatel/ Lucent), MetaSwitch (private UK-based company), Affirmed Networks (Evolved Packet Core or EPC), Amdocs, Juniper, Fujitsu, Brocade, and Ciena.  There will be others as this new platform makes it much easier to attract new entrants.

Being able to separate operational instructions (core optical equipment and routing functions – the “do this/ do that”) from monitoring, alerting, and change management functions, and then standardizing the structure of the latter across the vendors mentioned above is no small task.  All of that had to be done (or at least close enough to completion) to have the Microsoft/ IBM and Dell announcements.  Here’s a brief summary of what each does:

The IBM agreement takes the AT&T Business’ internal application infrastructure and moves it to the IBM cloud (this will be a consolidation from multiple providers).  As a reminder, IBM’s acquisition of Red Hat allows it to service hybrid cloud configurations.  Much of the NFV Infrastructure Cloud will move to IBM.  In turn, IBM runs a very large cloud business for third-party customers (top part of the diagram).  This moves the network closer to IBM’s (particularly AI or Artificial Intelligence) software.

It makes a lot of sense moving internal application infrastructure to IBM given the strong network relationship the two companies have had for two decades.

The Microsoft agreement takes non-network infrastructure applications and moves them to the cloud.  Microsoft is another very large cloud provider but also the developer of Windows, Bing, Office 365, Skype, and Xbox software (Microsoft’s IPTV platform, Mediaroom, was sold to Ericsson in 2013).  It gives Microsoft an easy path to both Mobile Edge Computing (MEC) and low latency network APIs.  Unlike the IBM agreement (which appears to have a heavy AT&T Business focus), the Microsoft agreement appears to be more open-ended. Xbox wins in a 5G world that’s also tied to AT&T Fiber homes.  So does Skype on mobile, desktop, and tablet applications.  More video and less latency demand a different way of thinking about network management.  Microsoft will help push the product envelope in the home and in the workplace.

The Dell agreement brings the Austin-based company into Airship (an organization governed by the OpenStack Foundation), described as “a collection of loosely coupled, but interoperable, open source tools that declaratively automate cloud provisioning and life-cycle management utilizing containers as the unit of software delivery.”  AT&T needs more network edge capacity flexibility and is engaging Dell to help them (via Airship) improve network server delivery.  More details on the agreement can be found in this Fierce Telecom article.

Bottom Line:  AT&T’s July and early August announcements show their early hand cloud and edge technology partners.  They have been at the leading edge of Network Function Virtualization (NFV) and Software Defined Networking (SDN), and are finally bringing together all of their infrastructure platforms into a common architecture.  This is the most efficient (really the only) way to enable rapid, profitable local growth.  It will be interesting to see how other carriers (specifically Verizon) follow AT&T’s lead.

Next week, per many requests, we will be discussing the role of Citizens Band Radio Services (CBRS) in the communications landscape.  Please note that next week’s TSB may not be delivered until Sunday evening due to the Labor Day holiday.

Until then, if you have friends who would like to be on the email distribution, please have them send an email to sundaybrief@gmail.com and we will include them on the list.

Have a terrific week!

The wireless infrastructure industry is poised for the next … END_OF_DOCUMENT_TOKEN_TO_BE_REPLACED