In part 1 of this series, we discussed the state of networks heading into 5G, and why we’ll need to move beyond today’s concept of assurance. To achieve tomorrow’s agile, self-organizing networks that can uphold absolute assurance, we’ll need five key components: AI, a programmable network, big data, guidance and humans. 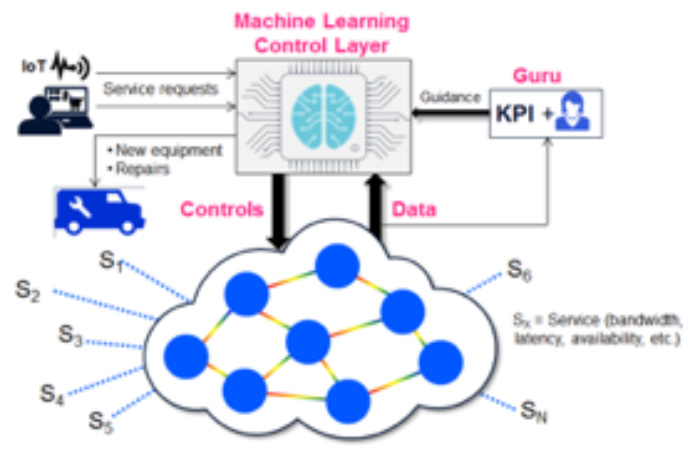 We know that achieving an agile, self-organizing network simply isn’t feasible with today’s approaches, and the amount of human control needed for existing networks is too cumbersome. Current automation technology has made improvements, but the limitations are clear: they have been built upon human-developed algorithms. Since these algorithms are static, they’re not well-suited to being agile and adaptive, proving fallible in the face of fluctuating service demands and unpredictable traffic patterns.

As I mentioned earlier in this article, we are shifting to a new age of networking where there are many types of users, each with different service and performance needs, and new services where true assurance is absolutely required. To even attempt to develop a model with today’s automation would be futile, as the network would likely end up over-provisioned, wasteful with resources and constantly failing SLAs.

A combination of Artificial Intelligence (AI) Machine Learning (ML) approaches (including Deep Learning) will make up the core of self-organizing networks, but its success relies on the infrastructure within which it will operate. Roughly, this is what is needed:

Up until today, networks have been restricted by tight budgets and operations focused on one layer at a time. Managing CapEx typically takes priority over OpEx for each layer, often failing to consider optimizing the network as a whole, working toward comprehensive service delivery efficiency. A more holistic view is needed.

“Multi-layer” is crucial to self-organizing networks. Since ML thrives when successfully organizing complexities, service providers should be equipping the network with many “programmatically configurable” technologies to optimize. Ideally, these will span L0-L1-L2-L3 technologies which provide optical, electro-optical and packet transport functionality.

When designing an agile, self-organizing network, the network nodes must be built with multiple transport and data plane technologies, or “gears”, which can be shifted and optimized to accommodate dynamically varying traffic patterns and random network events. The control layer, specifically, must be highly functional to balance constraints such as meeting a wide range of SLAs, yet keeping a reserve in the case of network failures.

This practice can also be applied to service attributes. Instead of correlating one service type with one SLA, each service can correlate with a number of attributes, including: start time and period of service, guaranteed versus best-effort bandwidth, guaranteed versus best-effort latency and availability, among others. This provides the means to negotiate satisfactory SLAs that meet customer needs while balancing performance and availability against cost.

With increasing nodes, traffic and services, today’s network equipment generates massive volumes of data in the form of event logs and alerts. ML needs this Big Data to create and refine its control models effectively. But this data is typically only collected at specific intervals – often intensively only during and shortly after initial deployment – and then intermittently to support business intelligence, planning, testing, or verification purposes. Without the systems in place today to acquire and process massive data streams in real-time, the potential of Big Data in today’s networks isn’t hopeful.

Once in place, besides guiding the network, we can also expect the combination of ML + Big Data to deliver interesting insights. For example, it could indicate which network “gears” are most used, directing vendors where to invest in network technologies.

Going far beyond human capacity, ML systems can undergo nearly constant loops of trial-and-feedback, assessing action and desired outcomes. Yet for agile, self-organizing networks to reach full functionality and deliver the desired result requires providing the ML system with ongoing guidance.  While it seems ML could be powerful enough to be self-sufficient, this guidance will come in a combination of automated and human forms.

KPIs: The ML control layer will use key performance indicators (KPIs) generated automatically from network data to evaluate whether its control actions, i.e., service provisioning, traffic balancing, or preventative network maintenance, are achieving expected results. The ML brain can then either reinforce its current algorithms or make adjustments.

Human Intervention: Humans will provide “gentle guidance.” To set the self-organizing system on the path to success, humans need to set policies for the ML controller – restrictions or priorities directing its objectives. Humans should also ensure that the ML controller is receiving meaningful KPIs, and adjusting how it prioritizes different KPIs, particularly when they might overlap or conflict with each other.

Besides guiding the ML controller, humans will also continue to have another role in an agile, self-organizing network. With customers’ evolving needs, humans still need to design the services to meet market demands. And certain hands-on tasks will never go away, such as laying cable, placing new nodes and changing broken equipment.

Getting to the self-organizing destination

It will not be easy to shift from networks that require primarily human-automated control to ML control. ML can’t be trained on a simulated network, but it still needs to operate successfully in complex and unpredictable real-world situations. Essentially, there is a period of measured, yet inherent risk until the ML brain reaches a state of minimum efficiency and directs its guidance on the network.

With what we know now, this will be implemented incrementally – topographically across the network, and in functional blocks. As service providers become more confident in the self-organizing parts of their networks, it can be added to other parts of the network and used for other functions like service provisioning, NE commissioning, and so on. The same method can be applied to roll back any functionality easily, in case issues arise.

Agile, self-organizing networks will exist in the near future, but service providers must be vigilant in their digital transformation efforts today to build the foundation for these networks. The near-term focus should be on adding multi-gear programmable networks, and putting in place the Big Data systems to report on network performance and events.

The wireless infrastructure industry is poised for the next … END_OF_DOCUMENT_TOKEN_TO_BE_REPLACED