Verizon is giving consumers a chance to get their hands on 5G technology and try it out, opening two 5G Experience Labs in Sacramento, California and Indianapolis, Indiana to showcase entertainment experiences including virtual reality and low-latency gaming.

The labs are temporary and will be open for a week, and they are only coming to cities where Verizon currently has its 5G Home fixed wireless access service available. Verizon plans to open two more labs — in Houston, Texas and Los Angeles, California — on December 3. 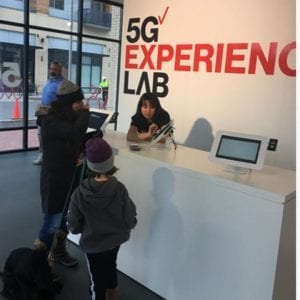 The 5G Experience Labs in 5G launch cities Sacramento, California and Indianapolis include virtual reality experiences including riding in a lunar capsule and walking on the moon that uses Positron chairs and VR headsets; virtual reality basketball with a VR headset; gaming on a mobile device connected to a video game controller with “practically zero lab,” according to Verizon; and a living room set up so that visitors can see for themselves how 5G-based home broadband service handles data-intensive video streaming on multiple devices.

The carrier also laid claim to another 5G first this week, saying that it successfully completed the first 5G New Radio data session on a smartphone which will be commercially available on its network.

It’s happening! This is the first time a 5G-upgradeable smartphone, the Moto Z3, is connecting to our 5G Ultra Wideband network. #FirstOn5G #Verizon #5G

The device is the Moto Z, which Verizon had previously indicated would be the first available commercial smartphone on its network that could access its millimeter-wave 5G network. The Moto Z comes with a clip-on “mod” that enables it to utilize both 4G and 5G networks.

Verizon said that it worked with Samsung, Motorola and Qualcomm Technologies on the test, which was conducted in Providence, Rhode Island. Verizon said that several tests were conducted, including internet browsing and a video call, using the Moto Z with the 5G mod, 28 GHz spectrum and Samsung’s 5G New Radio equipment.

Bill Stone, VP of technology development and planning for Verizon, said in a statement that the test of an actual smartphone that can access 5G NR, widens Verizon’s lead in 5G.

“We will be the first to offer a 5G upgradeable smartphone on our network in 2019,” he added.

AT&T announced on Oct. 26 that it had completed the first successful browsing session on mobile 5G NR, using its own first 5G device and Ericsson equipment: Netgear’s Nighthawk 5G Mobile hotspot, also known as AT&T’s “puck” for 5G. AT&T said that the puck is “the first standards-based mobile 5G device in the world able to access a live millimeter wave 5G network.”

The wireless infrastructure industry is poised for the next … END_OF_DOCUMENT_TOKEN_TO_BE_REPLACED