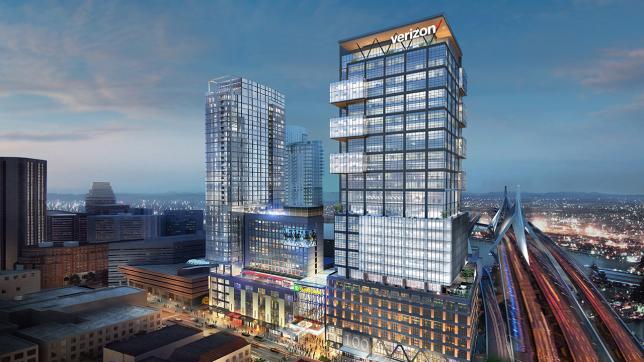 The Hub on Causeway (Image: Verizon)

Verizon is deepening its network infrastructure relationship with the city of Boston, with an updated 10-year agreement that touches on everything from small cell deployments to the carrier’s presence in the city and digital equity.

Verizon said that the new agreement covers $300 million in investments to its wireless network, doubling the $300 million investment in its Boston-area fiber network that was part of a six-year agreement with the city that was announced in 2016. The operator said that it will bring its Fios internet and television service into the Boston neighborhoods which weren’t included in its original franchise agreement and work with Boston on smart city solutions. In addition to expanding its network in the city, Verizon will also have a stronger presence in Boston: It will be an anchor tenant at the Hub on Causeway, a major mixed-use redevelopment project including retail, hotel, residential and office space that includes a 31-story office building, expected to be completed in 2021.

Verizon is leasing 16 floors at the top of the Hub on Causeway, with five floors “reserved for incubators, accelerators, and partners.” Verizon said that the building’s amenities — like large live-music venue, sports bar, food fall and movie theater — will be “powered by next-generation Verizon network services.”

“The decision to locate at The Hub reinforces the location as the most technologically advanced in the city and Boston’s nucleus at the intersection of tech and talent,” Verizon said. The carrier also said that it plans to expand its relationships with local colleges and universities to recruit new talent.

Verizon CTO Kyle Malady said in a statement that the city “has been a tremendous partner for us, and a great leader in building the digital city of the future. Together we’re creating a platform of innovation with the latest technology that will benefit Boston residents, businesses, universities, first responders and visitors for decades to come.”

“Our partnership with Verizon reflects one goal: to make sure all of Boston’s residents have access to the most advanced digital technology both now, and in the future,” said Mayor Martin Walsh in a statement, adding that “through partnerships with companies like Verizon, residents will have better, more affordable options, as we work together to create inclusive growth for our city.”

As part of the network expansion agreement, Verizon will also contribute $1 million to the Boston Digital Equity Fund, which was established in 2017 and provides grants to local non-profits which help underserved city residents to use technology for civic engagement, life goals and community needs and to help residents who don’t have broadband subscriptions to get access.

Verizon said that it will “significantly expand” its LTE small cell network in the city for additional speed, capacity and “to pave the way for the eventual deployment of 5G services in Boston.” The city of Boston will allow a streamlined permitting process for Verizon to install new small cells, while the carrier will provide smart-city solutions focused on areas such as traffic management, safety and energy efficiency.

In terms of the Fios expansion, Verizon said that more than half the homes in Boston currently have access to its fiber network, with service available in Dorchester, Hyde Park, Jamaica Plain, Mattapan, Roslindale, Roxbury, Seaport, South Boston and West Roxbury; this will expand to include Fios TV availability in Allston, Back Bay, Brighton, Charlestown, Downtown, East Boston, Fenway South Boston and South End, the operator said.

The wireless infrastructure industry is poised for the next … END_OF_DOCUMENT_TOKEN_TO_BE_REPLACED