I recently attended my second CWNP conference called “Wi-Fi Trek” in San Diego as a member of the CWNP family myself, I felt a great sense of community with the other delegates who also have at least one vendor-neutral certification. The CWNP under new leadership is making some great initiatives to reach out to a broader audience while retaining its member spirit. Maravedis is proud to be participating to that outreach. For those not familiar, the Certified Wireless Network Professional (CWNP) is the IT industry standard for vendor-neutral enterprise Wi-Fi certification and training.

This is a conference for and by networking and security experts who live and breathe Wi-Fi very with solid representation from various verticals ranging from healthcare to airlines. The new 802.11 ax amendment was the at the center stage of discussions for this WLAN community at the event. The following are some of the highlights of the event.

Given the proliferation of wireless technologies in the enterprise such as BLE and LPWAN, the CWNP is also expanding its certification offering and will introduce a new certification on integration next year. Details are coming soon and I will be happy to take that one!

Some vendors have already released 802.11 ax compliant radios, but the standard is not finalized yet. A list of List of 802.11ax Hardware is constantly being updated. Devices supporting 802.11 ax will be available before the end of the year with volumes ramping up in 2019.

The IEEE is currently scheduled to ratify the 802.11ax amendment in Q3 of 2019. The Wi-Fi Alliance has a similar timeline for an 802.11ax certification with testing planned for August 2019.

As a reminder, the 802.11 ax is the name of the IEEE amendment while Wi-Fi 6 is the new Wi-Fi Alliance label referring to vendor certification program for 802.11 ax.

Even though the amendment is not ratified yet, silicon and AP vendors have already agreed and committed to supporting some key aspects of the upcoming amendment such as OFDMA, Target Wake Time or BSS coloring on their chipset and hardware designs.

802.11 ax will provide a much-improved experience in dense environments characterized by the simultaneous connection of many devices. With the improved uplink capabilities and increased throughput, there will be much less competition among home users for airtime to send emails, post pictures to social media, and otherwise, upload data. The first improvement of 802.11 ax is to provide additional spectral efficiency, that is using Wi-Fi bandwidth more effectively. This is accomplished with the introduction of “Orthogonal Frequency Division Multiple Access (OFDMA)” a technique developed in the cellular world which enables to divide a channel into subcarriers called Resource Units and dedicated to specific end-users at the same time as shown in the picture below. 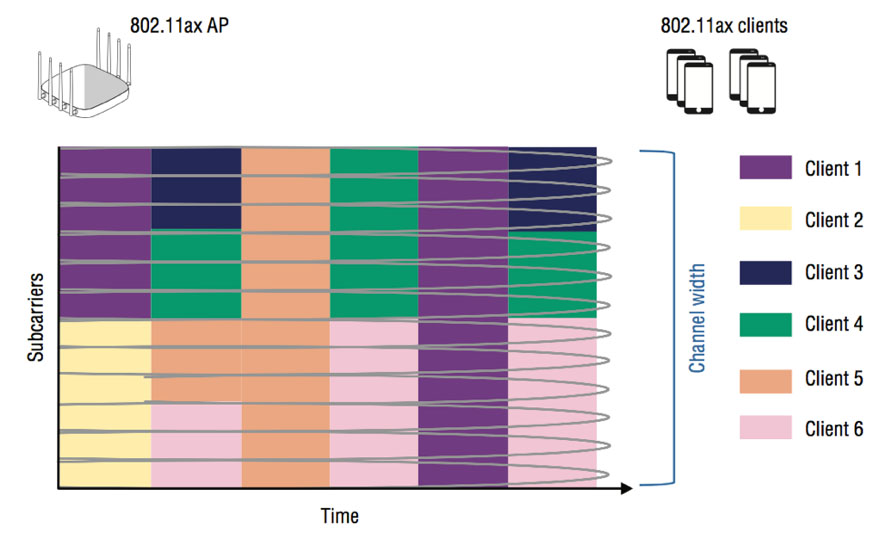 There was a great deal of skepticism in the audience about the opportunity for MU-MIMO to be widely implemented at least in the short term because of its indoor limitations and the fact that uplink MU-MIMO for 802.11 ac is not expected until wave two which is still years away.

MU-MIMO allows for multiple-user access by using different spatial streams. Access points will send unique steams of data to multiple clients simultaneously. “The 802.11ax standard also allows for the combined use of MU-MIMO and OFDMA but MU-MIMO is not expected to be widely implemented,” says Perry Correll, Director, Product Management at Aerohive.

“OFDMA is designed to deal with high-density clients, is a proven technology coming from the cellular side and was also part of the 802.16 WiMAX standard,” he added.

Indoors, MU-MIMO would be hard to work, “if have 30-40 people in the same room because of the physical separation needed to stream those beams” Perry added.

MU-MIMO requires to transmit beamforming (TXBF) which requires sounding frames. The sounding frames add excessive overhead, especially when the bulk of data frames are small. MU-MIMO would only be a favorable option in very low density, high bandwidth environments, with a small number of users requiring extremely high throughput.

Alexandra Gates (also from Aerohive)wrote in her blog “Multi-user OFDMA will be the most relevant technology that 802.11ax offers. Regardless of stream count, all APs will support the same number of 802.11ax OFDMA clients. OFDMA technology makes better use of the available frequency space by subdividing the channels into resource units for simultaneous multi-user transmissions both downlink and uplink. Even with a 20 MHz channel, we can talk simultaneously to up to 9 client devices and theoretically up to 37 with an 80 MHz channel (although enterprise customers should rarely use anything above 20 MHz).

However, MU -MIMO is great for outdoor PMP to connect AP that are well physically separated with dedicated spatial streams.

With the proliferation of Wi-Fi devices and usage, as well as 802.11 ax allowing wider channels, the Wi-Fi community is pressured to look for additional spectrum to maintain high-quality experience. Overall, the main sources before 2020 will be as follows:

Most of these will be enabled by new spectrum-sharing techniques, which make it more practical to have Wi-Fi (and other license-exempt technologies) coexist with licensed incumbents such as radar.

Shared spectrum options, such as TVWS and 3.5 GHz (especially in North America).

Expansion into the bands currently used by short-range devices and others, notably 863-868 MHz, with the 802.11ah extension.

Expansion into 60 GHz spectrum courtesy of the WiGig standard (802.11ad).

Chuck Lukaszewski, Vice President, Wireless Strategy & Standards at Aruba provided a very comprehensive overview of the new spectrum opening for unlicensed usage at 6GHz and beyond which could be the basis of a report study by itself!

Unlicensed access to the 5.925 – 7.125 GHz band – referred to as the 6 GHz band – is particularly important to the future of Wi-Fi innovation. According to the Wi-Fi alliance, this spectrum is suitable for deployment of the next generation of Wi-Fi, as it offers sufficient bandwidth to alleviate data traffic congestion and provides for commonality of equipment with existing Wi-Fi networks already using adjacent frequency band.

The ‘Notice of Proposed Rule Making’ is not the final step in the FCC’s regulatory process. The NPRM is the FCC’s proposal for the rules in 6 GHz for which the Commission will seek public comment. Subsequently, based on input received, FCC will issue a Report and Order. “The Wi-Fi alliance is hopeful that the FCC’s regulatory process to allow unlicensed use of 6 GHz will be completed by end of 2019 – if all goes well”. 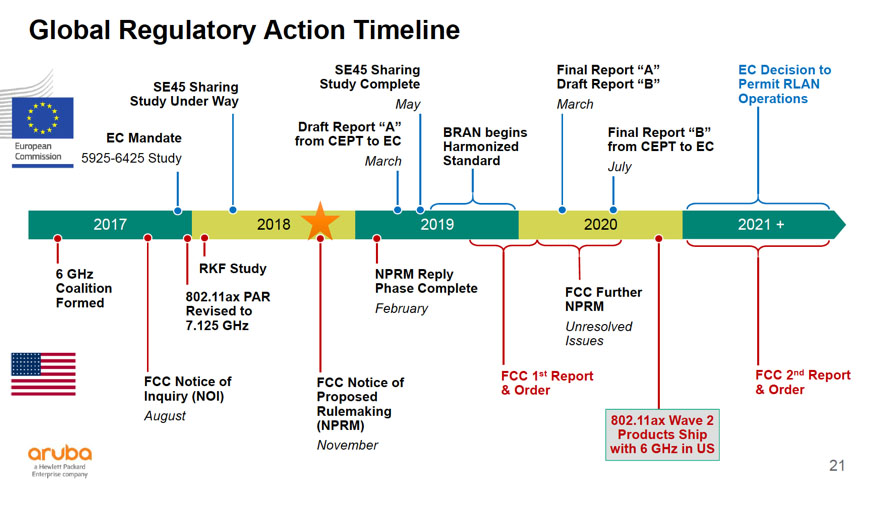 However, other groups are against opening up that band to unlicensed use. According to AT&T, the band contains about 100,000 microwave links, many of which are carrying critical voice and data traffic, including for the nation’s first responders. Furthermore, as AT&T reports, ca. 25% of the links in the 6 GHz band support public safety and critical infrastructure industry licensees, and ca. 27% of the links in the band support utilities, making the upper and lower 6 GHz bands essential in terms of supporting the nation’s critical infrastructure. It also said that maintaining long-haul and high-reliability microwave links will be critical for 5G and other advanced services. In this context, Automated Frequency Coordination (AFC) will be an important tool to avoid interference issues.

Overall a very productive conference with down-to-earth presentations and discussions from people who deploy and manage enterprise Wi-Fi networks and a great CWNP family reunion!

A special thanks to the CWNP, Aerohive and Aruba teams for their great insights!

The wireless infrastructure industry is poised for the next … END_OF_DOCUMENT_TOKEN_TO_BE_REPLACED