Wireless data use continues to climb, with the latest analysis from industry group CTIA showing an 82% increase in mobile data use between 2017 and 2018.

According to CTIA’s newly released annual survey of the U.S. wireless industry, “wireless use was up across nearly every metric we track—from voice minutes, to text messages, to data use.”

U.S. consumers used 28.58 trillion megabytes of mobile data in 2018, which CTIA was the equivalent of 250 million people playing Fortnite for 1,906 hours.

But data use wasn’t the only wireless communications mode on the rise: CTIA’s survey also found that time spent talking on mobile devices was up nearly 10% from the previous year, to nearly 2/4 trillion. Meanwhile, SMS and MMS messaging was up nearly 16% to more than 2 trillion messages sent.

Meredith Attwell Baker, president and CEO of CTIA, said in a statement that the “exponential growth underscores the need to continue to free up spectrum to keep up with demand, and provide the much needed capacity for next-generation 5G networks.” 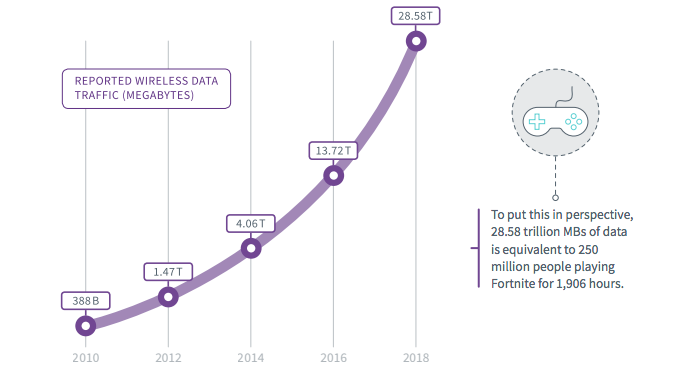 Other findings from the survey included:

“The biggest growth was in data-only devices, such as smartwatches, IoT devices, and connected cars—which saw an increase of more than 10% to 139.4 million devices,” CTIA said.

The wireless infrastructure industry is poised for the next … END_OF_DOCUMENT_TOKEN_TO_BE_REPLACED