Sprint turned on 5G in one of their most important and largest markets—Chicago, on July 11th, 2019. I witnessed the launch and right after extensively tested the network for a couple of days. I tested the service from the user’s perspective, mimicking typical mobile user behavior, including a mix of pedestrian, in-vehicle, and indoor usage. I was not just looking for speeds, but also evaluating coverage and user experience for various data-heavy applications. Additionally, I utilized engineering tools such as Spirent’s Umetrix to simulate typical user behavior. All the testing was done without the knowledge of site locations, only using general coverage guidance provided by Sprint.

My verdict after all the testing– It’s the 5G network that delivers! By that I mean, it has enough 5G coverage, and offers a significant improvement in speeds and user experience, compared to existing 4G LTE, so that Sprint’s users will unmistakably notice and benefit from it.

Now the details! During the launch presentation, Sprint mentioned that they have deployed close to 100 sites, with coverage spanning the Chicago downtown. The network infra provided by Samsung uses 60 megahertz of mid-band 2.5 GHz spectrum for 5G (another 60 megahertz for LTE) and utilizes 64T64R Massive MIMO configuration (shared with LTE). The 5G site density is probably far less than their 4G network.

The first priority for any operator is providing good coverage and much-needed capacity in the high traffic areas. And Sprint has adhered to that. The beautiful Northwestern University campus on the beaches of Lake Michigan in the downtown is one such area, where you can see throngs of students on their phones and laptops round the clock. I saw impressive speeds in many areas of the campus. 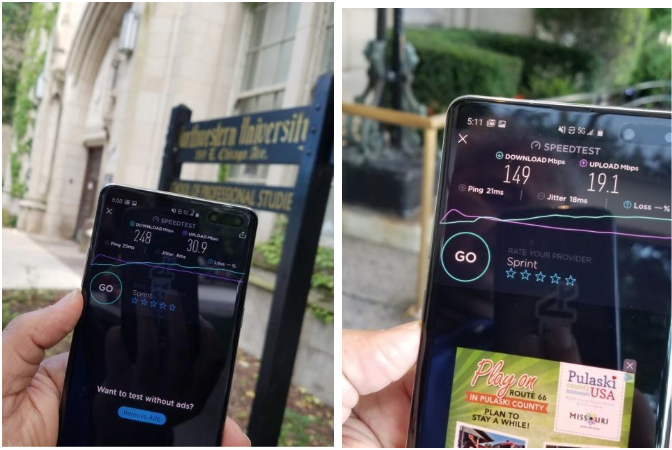 I then hit the picturesque river walk on the north side of the Chicago River. The speeds were pretty good there too. 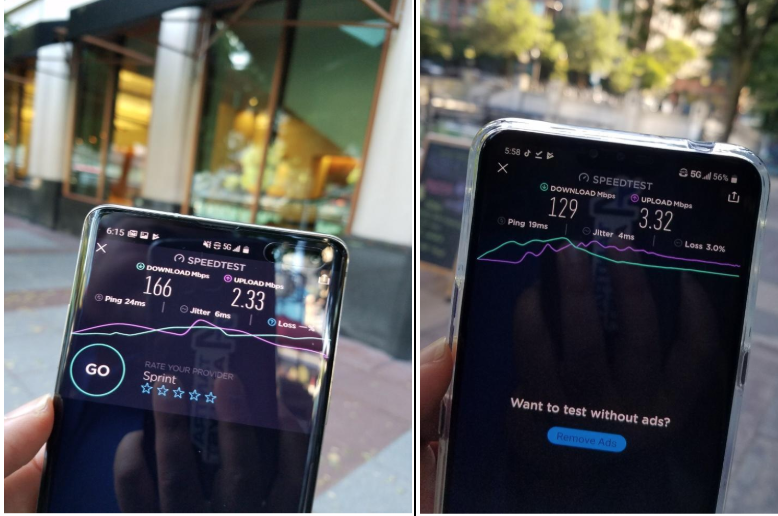 I went inside one of the buildings (Sheraton) and still could get good speeds. This was behind one layer of glass walls.

After that, I walked around a lot in the downtown in and around Magnificent Miles area and was always connected on 5G, not ever dropping, when I was outdoors. 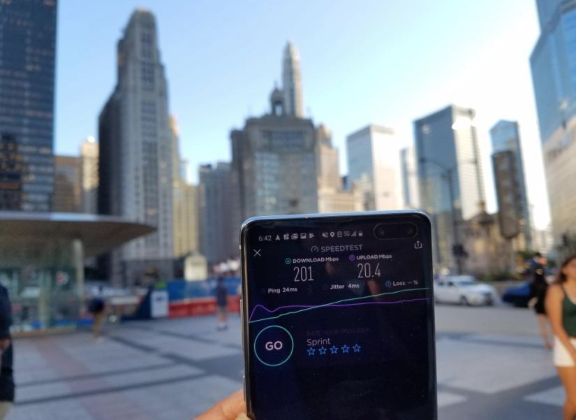 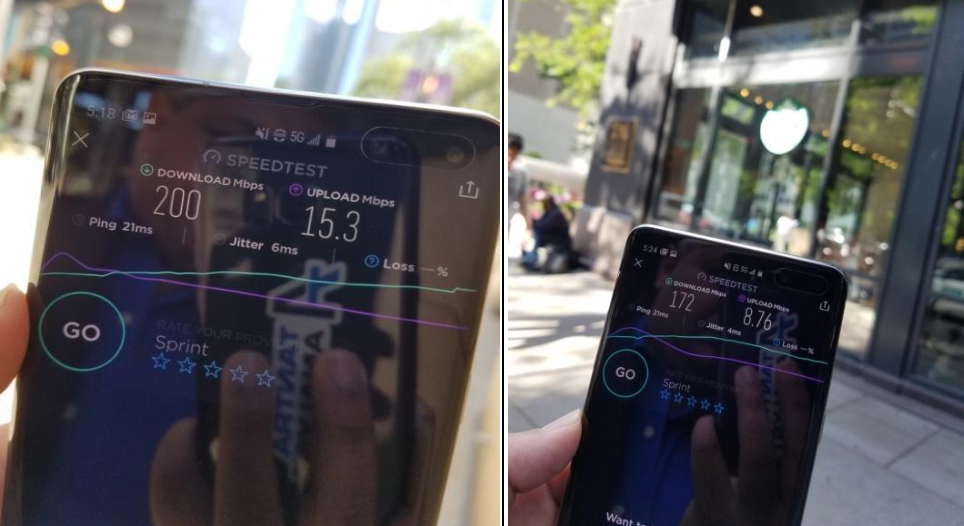 The speeds did dip at some places when I was in very narrow alleys or very close to tall buildings without much room for the signal to sneak through. But the overall speeds were more than 100 -150 Mbps in most of the places I tested.

As understandable for a brand new network, the indoor coverage is limited. I could get good speeds if I was in open indoor places with a lot of windows, wide doors, etc. such as cafes and sidewalk restaurants. 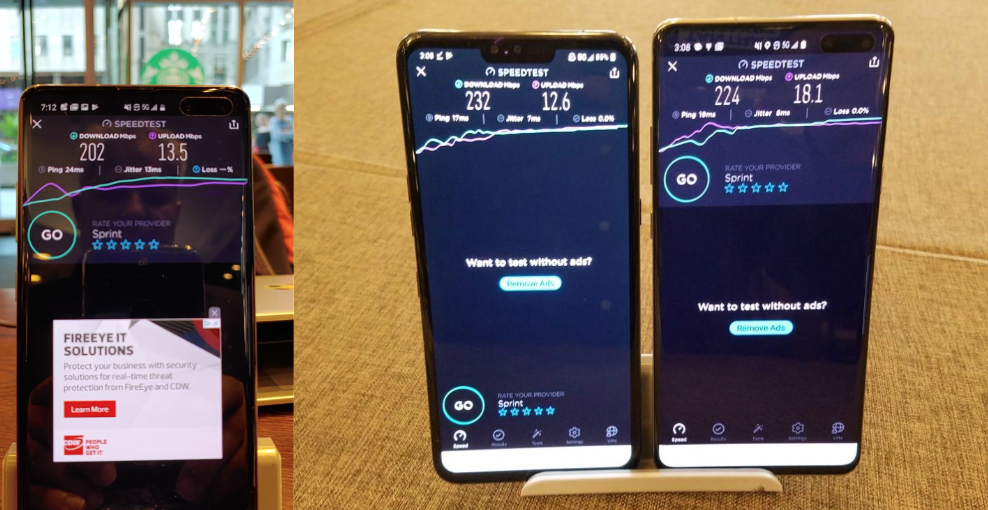 However, things were different when I moved deep inside, behind brick walls. Considering the dense concrete and brick buildings in Chicago downtown, the indoor coverage was spotty, unless, as mentioned I was near a window or door, or on higher floors above near field obstructions. The indoor coverage will improve when Sprint increases the site density.

With limited coverage, the most important thing is what happens when users move out of 5G coverage. Well, 5G is designed to seamlessly handoff to 4G without users ever noticing it. That’s exactly what happens with Sprint network. That is made possible by a feature called dual-connectivity, which allows simultaneous connectivity to both 4G and 5G. So, even when the 5G connection drops, the 4G connection is always there to take over. I must have done at least 50 handoffs during all of the testing, never did I notice apps hanging or videos buffering, etc. Of course, if you are doing speed testing and move from a 100+ Mbps connection to 10s of Mbps speed, you will notice it, but probably not when using actual applications. Here is a short clip of one such instance. I moved from 5G to 4G when playing a video from Netflix, going in and out of a Target store, and the video played without a glitch! I have speed captures of before showing the difference.

User experience and comparison with 4G

While most of the smartphone applications are still preparing to really utilize the full capabilities of 5G, the data-heavy uses such as downloading movies, large files, videos, and such will see a huge improvement in experience with 5G. I was able to download the complete “The Emoji Movie” movie in under two minutes while sitting in a Starbucks downtown. Well, with 4G, the movie download didn’t even start in the first minute. It being the evening, the 4G network probably had peak traffic. This comparison clearly shows the improvement in the experience users will get with 5G. Similarly, downloading a TV episode took a little over 10 seconds on 5G and up to 40 seconds on 4G. The 4G speeds were in 10-20 Mbps in many places I tested. I should admit that I didn’t do as much 4G testing though.

Compare that to downloading a TV episode on 4G.

I spent more than six hours of driving, testing in-vehicle user experience, and finding the extents of coverage in the city. 5G coverage is solid in most parts of downtown and popular destinations such as Magnificent Mile, River North, Millennium Park, River Front, The Loop, Grant Park, as well as the neighborhoods of Gold Coast, Old Town, West Loop, Ukrainian Village, Medical Village, University of Illinois at Chicago, South Loop and others. 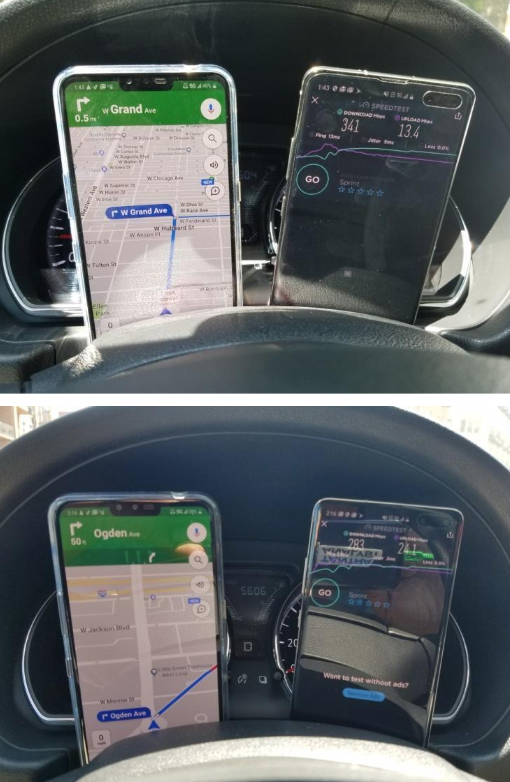 Speeds were really good at the Fifth Third Arena as well. 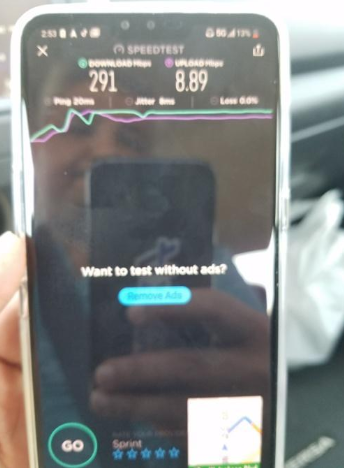 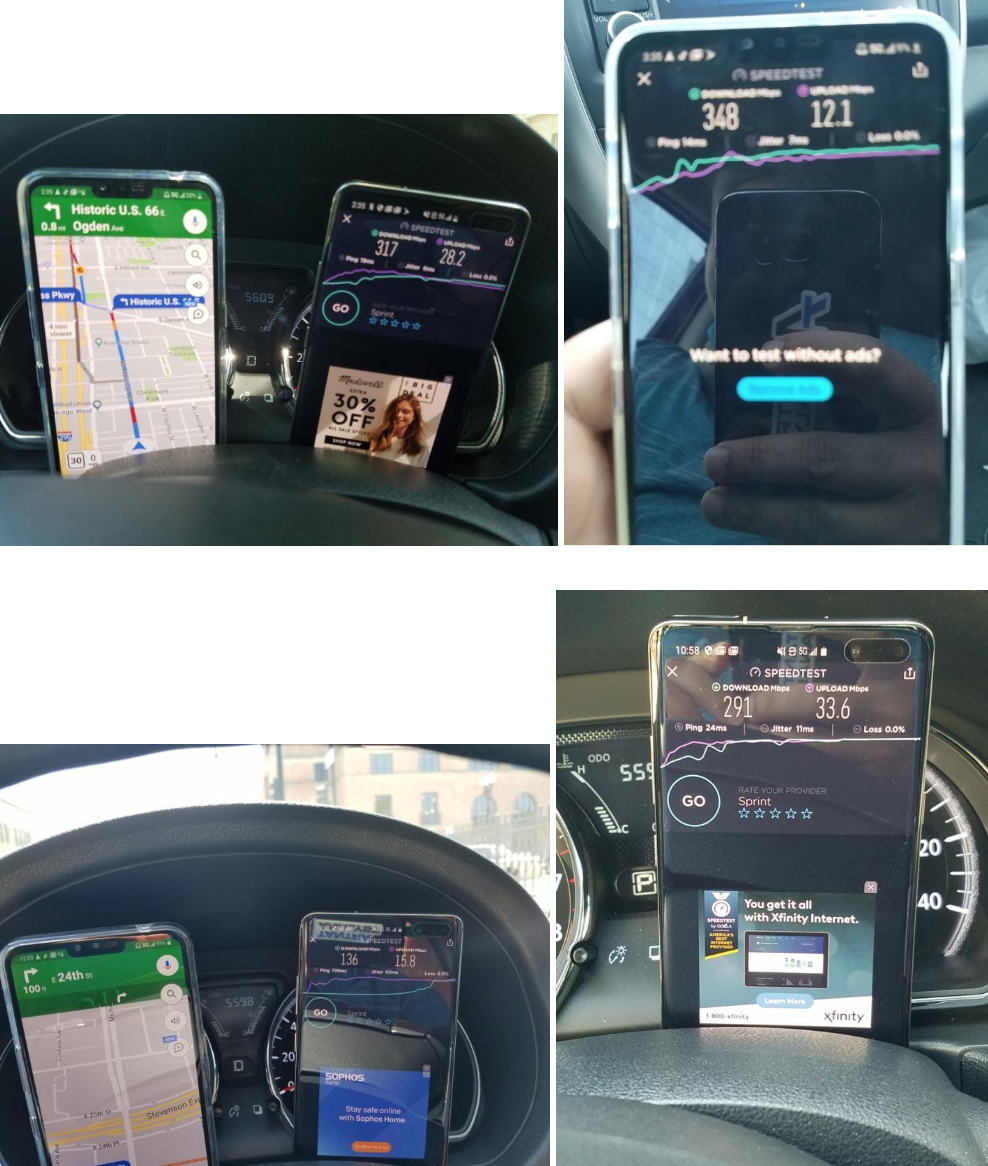 Telecom test instrument leader Spirent lent me their Umetrix smartphone-based tool for some detailed testing. Umetrix allows testing for a wide variety of traffic profiles, without needing expensive equipment. Umetrix is especially useful for regression testing to understand sustained speeds, beyond the simple burst tests that Ookla’s speed test app or Netflix’s Fast app can provide. It can test for a wide range of key performance indicators such as throughput, latency, jitter, packet error/loss, and others. It can also log many data points such as RF signal condition, cell ids, GPS locations of the testing, and more, all conveniently uploaded to their server for later analysis.

Because of time constraints, I primarily used Umetrix to measure the consistency of speeds while driving around at highway and street speeds. Here are some of the TCP/HTTP download speed results based on Umetrix.

You will notice that these speeds are slightly lower than the ones speed test apps show. That is because Umetrix utilized the Spirent server located in Virginia, whereas the speed test apps used local Sprint servers. That means Umetrix’s numbers were affected by the network connection quality between the Sprint gateways/interconnects and Spirent server.  The difference in speeds between the two was around 25-30 Mbps. 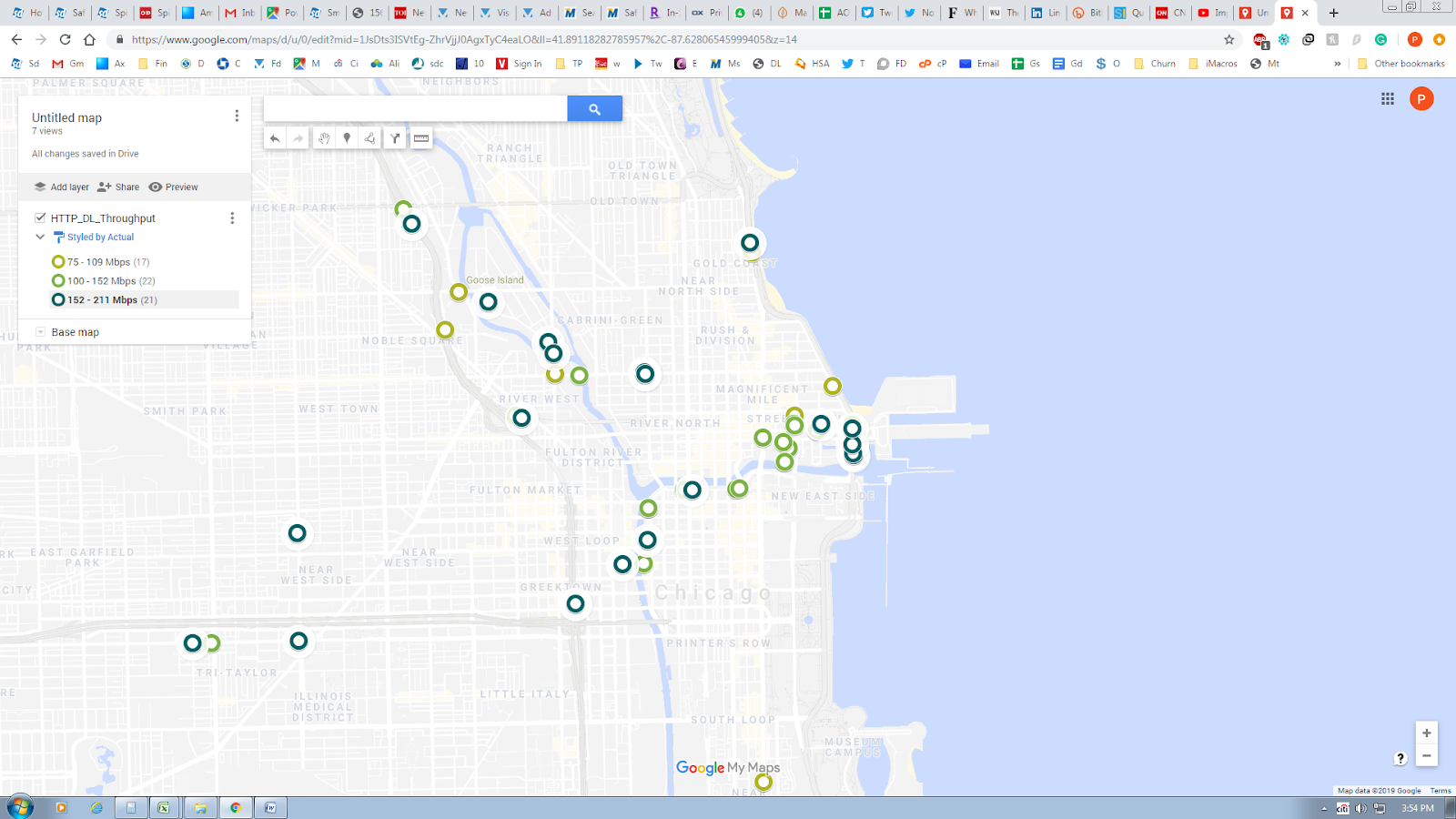 Considering that I was testing a brand new network immediately after launch, the coverage and speeds were pretty impressive. Some might point out that these speeds are far lower than Gigabit speeds promised by 5G and some mmWave networks might provide. Users don’t buy 5G phones to do speed tests. They buy them for improved performance and experiences. With the expansive coverage that Sprint’s 5G network provides, users will see meaningful improvement in most of the data-heavy applications they currently use and will be able to experience new things like downloading a movie in minutes, instant access to the content on the cloud as if it’s on their phone, and more. I am more than confident to say that Sprint’s Chicago network delivers on the promise of 5G, and is something that users can really use and experience now!

I drove around most of those places and had continuous 5G connectivity, hardly ever dropping when within the specified coverage limits (discussed below). Here are some of the excerpts at and around the United Center arena. I actually hit the highest speed of my testing, 341 Mbps in that area as well.

The post My verdict after extensively testing Sprint in Chicago–It’s a 5G network that delivers appeared first on RCR Wireless News.

The wireless infrastructure industry is poised for the next … END_OF_DOCUMENT_TOKEN_TO_BE_REPLACED