3GPP is this mystic organization that many seem to know, but few understand it. The key players of this efficient and well-regarded organization work often without the fanfare or public recognition. But no more! As part of this article series, I go behind the doors, explore the organization, meet the hard-working people, and bare the details on its inner workings.

Side note, if you would like to understand the cellular standardization process, please read my previous articles in the series here, here, and here.

“3GPP is a membership-driven organization. Any company interested in telecommunications can join, through one of its SDOs (Standard Development Organizations)” said Mr. Balazs Bertenyi of Nokia Corporation, the current chair of TSG-RAN and a 3GPP veteran. “One of the important aspects of 3GPP is that a large portion of its working-level office bearers are members themselves and are elected by the other fellow members.”

I became a proud member of 3GPP through the American SDO, ATIS, earlier this year. 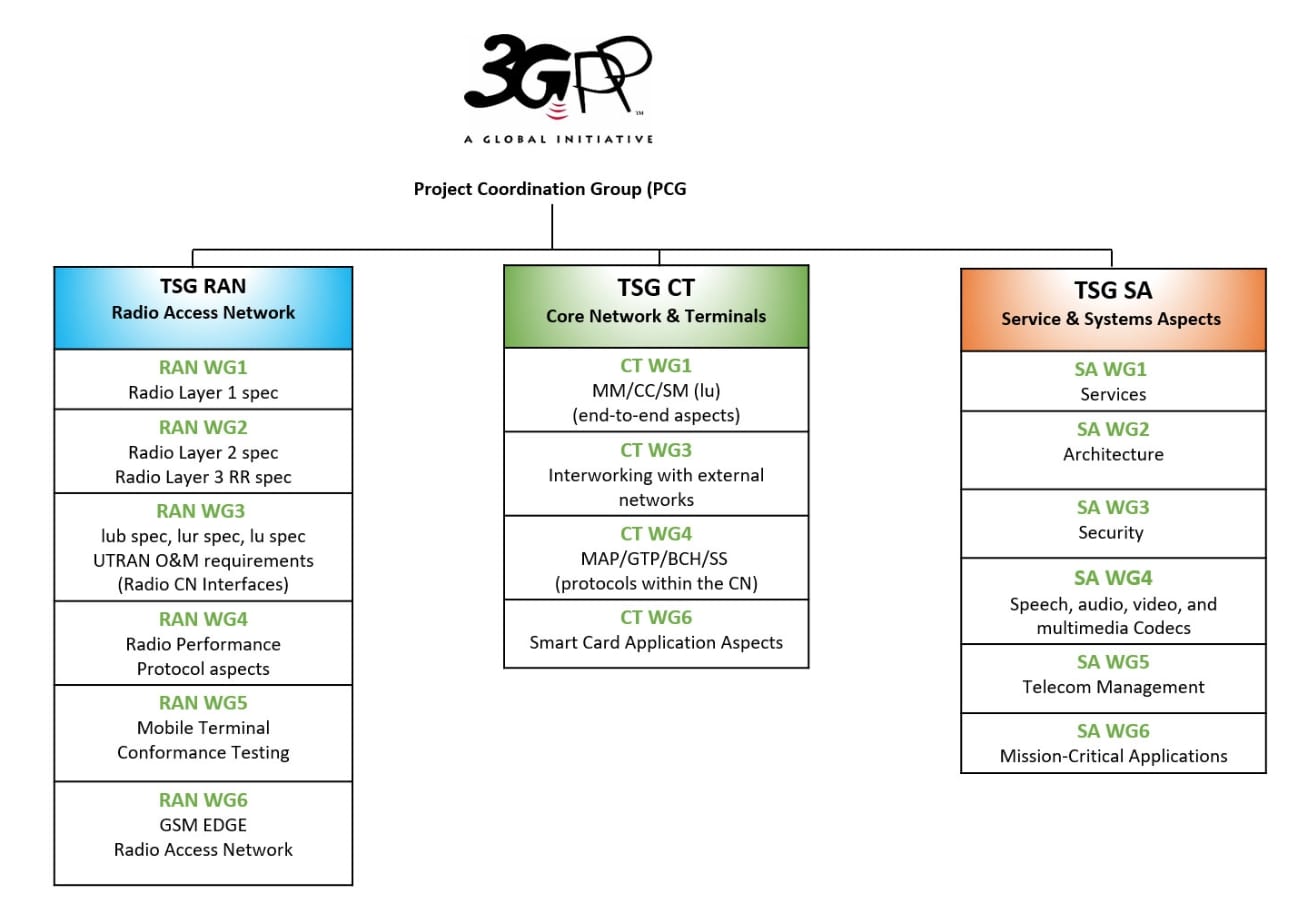 3GPP consists of three layers, as shown in the schematic: Project Coordination Group (PCG) at the top, which is more ceremonial; three Technical Specifications Groups (TSG) in the middle, each responsible for a specific part of the network; multiple Working Groups (WG) at the bottom, where the actual standards development occurs. There are many ad-hoc groups formed within each of these as well. All these groups meet regularly, as shown in the example meeting cycle.

Inner workings of WGs and the unsung heroes

Let’s start with the WGs, specifically the ones that are part of TSG-RAN. Being an RF Engineer, these are closest to my heart. However, this discussion applies equally to other TSGs/WGs as well. There are six WGs within TSG-RAN, each with one chair and two vice-chairs.

The best way to understand the group’s workings is to analyze how a fundamental 5G feature such as Scalable OFDMA would be standardized. There might be a few proposals from different member companies. The WGs have to evaluate these proposals in detail, run simulations for various scenarios to understand the performance, the pros and cons, competitive benefits, and so on. They have to decide the best solution and develop standards to implement it across the system. As evident, the WG chair must facilitate the discussion in an orderly, fair, and impartial way, and let the group reach a consensus decision. As you can imagine, this task is a combination of science and art—bringing people together through collaboration, personal relationships, and making sure they arrive at meaningful conclusions—all of this while under tremendous time pressure.

In such a situation, WG members expect the chair to be fair, balanced, and trustworthy. Many times, the members whose companies they represent are bitter competitors with diagonally opposite interests, each trying to push their views and assertions for adoption. “It is quite a task bringing these parties together for a consensus-based agreement, in the true spirit of 3GPP,” says Mr. Bertenyi. “It requires deep technical knowledge, a lot of patience, empathy, leadership, and ability to find common ground to be a successful WG chair.” That is the reason why 3GPP’s process of electing chairpersons through the ballot, instead of nomination, makes perfect sense.

The members of WG vote and elect somebody they trust and have respect for to lead the group. Before taking over, the employer of the newly elected officer has to formally sign a support letter declaring that the officer will get all the support from his company to successfully undertake his duties as a neutral chair. “From then on the elected officer stops being a delegate for his company, and becomes a neutral facilitator working in the interest of 3GPP and the industry” added Mr. Bertenyi. “Being a chair, I have presided over many decisions that were not supported by my company but were the best way forward in a given dispute. I have seen it often happen in WGs as well. For example, I saw Wanshi Chen, chair of RAN-1 do the same many times.”

The WG members are primarily inventors trying to develop solutions for difficult technological challenges. The WG chairs are at the forefront of this effort, and by virtue of that, it is not uncommon for them to be prolific inventors themselves and be a party to a large number of patents. This, in fact, proves that they are worthy of the leadership role they are given.

“It wouldn’t be untrue to say that the hard-working WG chairs are truly unsung heroes of 3GPP, and they deserve much respect and accolades,” says Mr. Bertenyi. “I am extremely proud to be working with all the chairs of our RAN WGs—Wanshi Chen of Qualcomm heading RAN-1, Richard Burbidge of Intel heading RAN-2, Gino Masini of Ericsson heading RAN-3, Xutao Zhou of Samsung heading RAN-4, Jacob John of Motorola heading RAN-5, Jurgen Hoffman of Nokia heading RAN-6.”

Responsibilities of TSG and PCG

While the WGs are workhorses, TSG sets the direction and manages resource allocation and on-time delivery of specifications.

There are three TSGs, one each for Radio and Core Networks and a third for systems work. Each of the TSGs has a chair and three vice-chairs, all elected by the members. They provide direction based on market conditions and needs. For example, the decision to accelerate 5G timelines in 2016 was taken by the TSG-RAN. The chairs are usually accomplished experts and excellent managers. I witnessed how effectively Mr. Bertenyi conducted the recent RAN#84 plenary while being fair, cheerful, and decisive at the same time.

PCG on record is the highest decision-making body, dealing mostly with non-technical project management issues. It is chaired by the partner SDOs on a rotational basis. It provides oversight, formally adopts the TSG work items, and ratifies election results and the resources commitments.

As mentioned, all the working-level 3GPP office bearers are duly elected by fellow 3GPP members in a completely transparent ballot process. The standard tenure of each office bearer is two years. But often they are reelected for a second term based on their performance, as recognition for their effective leadership. Many times members start with vice-chair position and move on to the chair level, again based on their performance.

3GPP is a truly democratic, consensus-based organization. Its structure and culture that encourages collaboration, even among bitter business rivals, has made it a premier standards development organization. The well-managed cellular technology roadmap and success of the mobile industry at large is a testament to 3GPP’s systematic and broad-based approach.

The post The inside story of 3GPP–Who are the unsung heroes that create the standards? (Analyst Angle) appeared first on RCR Wireless News.

The wireless infrastructure industry is poised for the next … END_OF_DOCUMENT_TOKEN_TO_BE_REPLACED