As 5G moves from the lab to the real world with the activation of commercial networks and rapid advancements in bringing to market compatible devices, Dean Brenner, Qualcomm senior vice president of spectrum strategy and technology policy, provided an update on how regulators are supporting commercialization efforts with 5G spectrum allocations.

Speaking at Qualcomm’s 4G/5G Summit last week in Hong Kong, Brenner said, when considering spectrum sharing, unlicensed use and multi-channel carrier aggregation, 5G will come with up to 10,000 band combinations. “We’re going to use every conceivable kind of spectrum there is for 5G.”

Noting 5G’s  projected economic impact of $12 trillion in goods and services by 2035, Brenner said, “When regulators, government officials, set policy for spectrum, they understand this kind of impact is just gigantic. There may be no single sector of the global economy that can have a bigger impact on life in general than mobile.”

In the U.S., 5G spectrum policy is set by the Federal Communications Commission, which Brenner described as a “world leader” as it relates to earmarking millimeter wave spectrum, which will be the workhorse for multi-gigabit-per-second speeds. Later this month the FCC will oversee sequential auctions of 24 GHz and 28 GHz frequencies. On the sharing front, the FCC recently set rules that govern shared access and licensure for the 3.5 GHz Citizens Broadband Radio Service band. 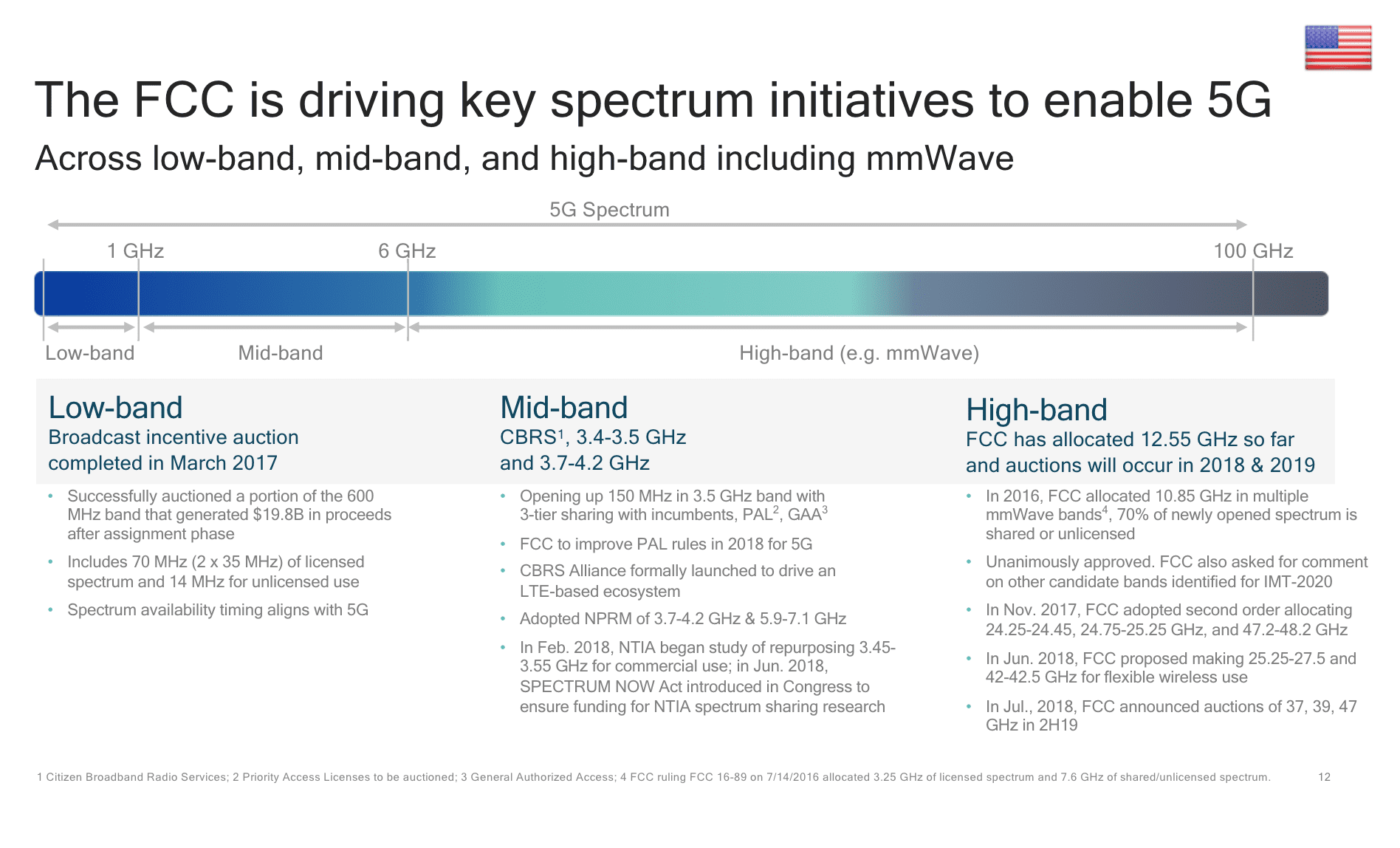 Brenner called the spectrum landscape in Europe “very complex” given multiple layers of governance at both the individual country level and then at the European Commission level. While 3.5 GHz in the U.S. has been set aside for sharing, it’s a key 5G spectrum band in many other geographies. In Europe, the U.K. has divvied up 150 megahertz in 3.4 GHz to 3.6 GHz; Italy has set aside capacity in the 3.6 GHz to 3.8 GHz bands; France has a Q4 auction of 3.46 GHz to 3.8 GHz; Spain auctioned space in the 3.6 GHz to 3.8 GHz, Switzerland has a mid-band auction coming in January next year and Ireland has auctioned 3.4 GHz to 3.8 GHz. The below graphic provides a more extensive recap of both mid-band and millimeter wave actions in Europe. 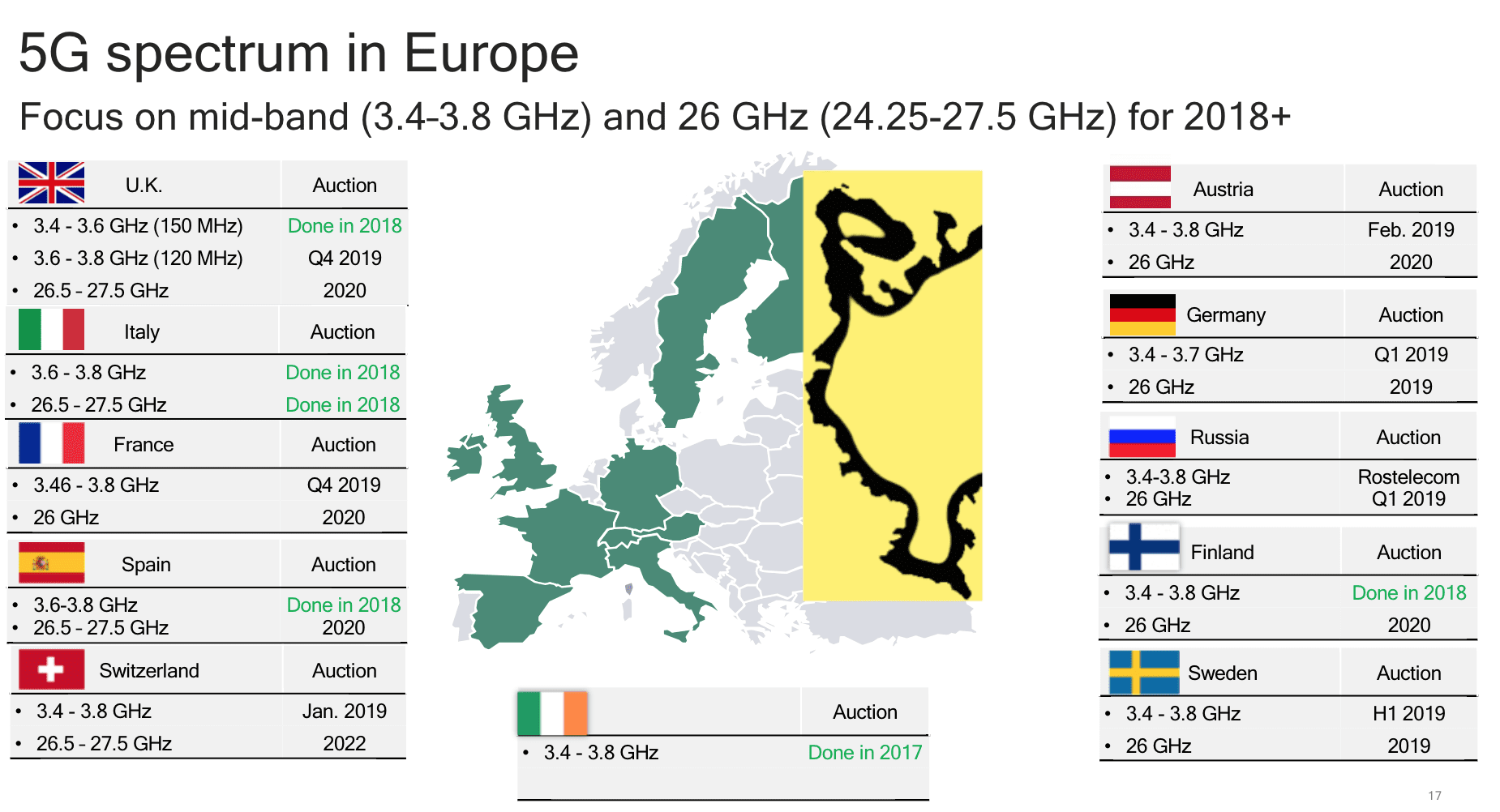 Moving on to China, Brenner said things are on track to launch 5G in the 3.3 GHz to 3.6 GHz and 4.8 GHz to 5 GHz bands while millimeter wave is “a little further out.” In Korea, there have already been mid-band and millimeter wave auctions. “Korea really wants to be a major leader in 5G,” he said. “The carriers and the OEMs are ready to go.”

Brenner said, “Latin America is probably the furthest behind of all these regions. The 4G roll out is still not really finished.” Beyond that, “There’s no part of the world that we’ve looked at yet that is just stuck in the mud, not moving ahead.”

The wireless infrastructure industry is poised for the next … END_OF_DOCUMENT_TOKEN_TO_BE_REPLACED